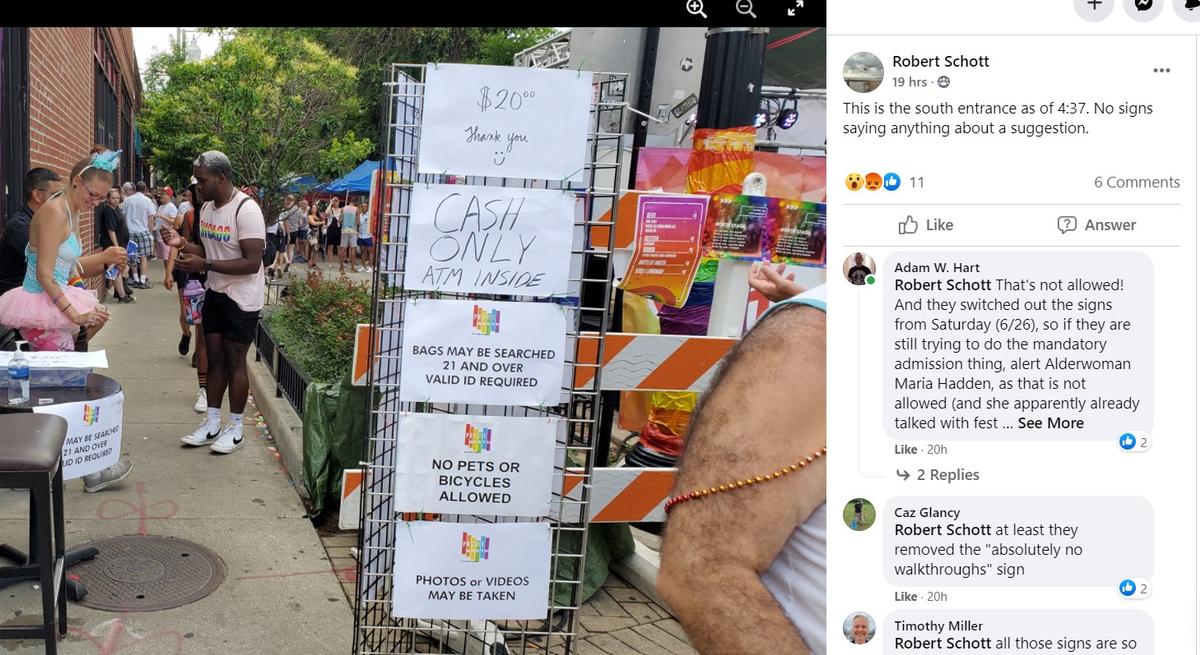 Ald. Maria Hadden (49th) received complaints that Pride North patrons were being told to pay a mandatory $20 fee for admission—despite the city requiring that it could only collect a suggested donation.

“I went there and they didn't let us go in without paying $20,” a frustrated would-be attendee posted on Facebook.

The ward office explained that signage was supposed to clearly indicate that admission was free and that it was collecting a suggested donation of $20.

Patrons and would-be patrons said those signs disappeared and were replaced with handwritten flyers only mentioning that they were collecting $20.

Furthermore, patrons who wanted to take advantage of a preview of Mission Control Arcade—which hasn't opened yet—couldn't get past the gate. They were told they had to pay to walk through.

Hadden noted that she made repeated visits and admonitions during the street festival. But the fleecing allegedly continued.

“Pride North Chicago cannot require you to pay to access the festival or the street. It's a violation of their permit,” Hadden explained in a Facebook video. “You should report it via 311 immediately."

Treacy, former owner of the failed Pub 626 and MorseL, was decried in several posts directly. Advocates for the neighborhood called on the city to hold him accountable and maybe refuse him a license to host future events.

Some patrons just turned around.

One Facebook user lamented, “All those signs are so unwelcoming. No thanks, I'll celebrate my pride this Sunday afternoon at welcoming Jarvis Square."

Hadden says anyone can petition the city to host a festival. She has asked that if anyone is interested in planning a Pride event like Pride North to meet with her.

GoPride.com attempted to contact several persons connected to these events and has not yet received responses, except from Treacy's friend Craig Gernhardt. Gernhardt offered a defense of his friend by taunting the author of this story.