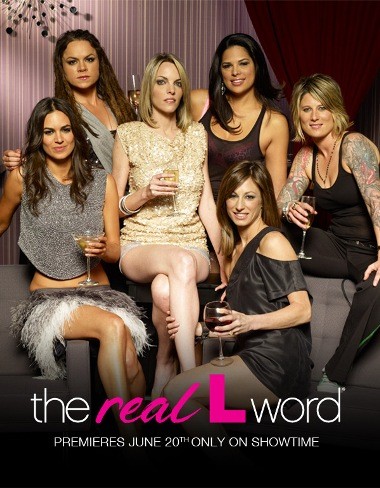 The show follows six lipstick lesbians around Los Angeles as they go about their lives. They were clearly chosen by the same agents who cast every show, with backgrounds and issues meant to cause drama and trouble.

The cast includes Rose (a Latina real estate advisor), Mikey (a workaholic marketing director), Nikki and Jill (rich and getting married), Whitney (dreadlocked and juggling several girlfriends), and Tracy (who's also Latina and fresh out of The Closet).

So far, critics have not been impressed.

"We follow the lesbians through their boring days and nights, guided only by the fact that they are each lesbians, who cannot stop talking about the lesbianness of being lesbian," wrote
Washington Post television critic Hank Stuever.

"'The Real L World'" is no more or less entertaining than any other reality series," wrote Tim Goodman in the San Francisco Chronicle.

"But it's mostly just a reality series. And that means manufactured scenarios, big drama, tears, tattoos, drinking, sex, swearing and lots of arguing and playing to the camera," wrote Goodman. "Straight people have been making fools of themselves on TV like this for ages."

The Washington Post agrees that in a sad way, "The Real L Word" is a step forward for gay rights.

"Lesbians have just as much right to be miserably narcissistic on miserably stupid reality shows," said Stuever. "Equal misery for all!"