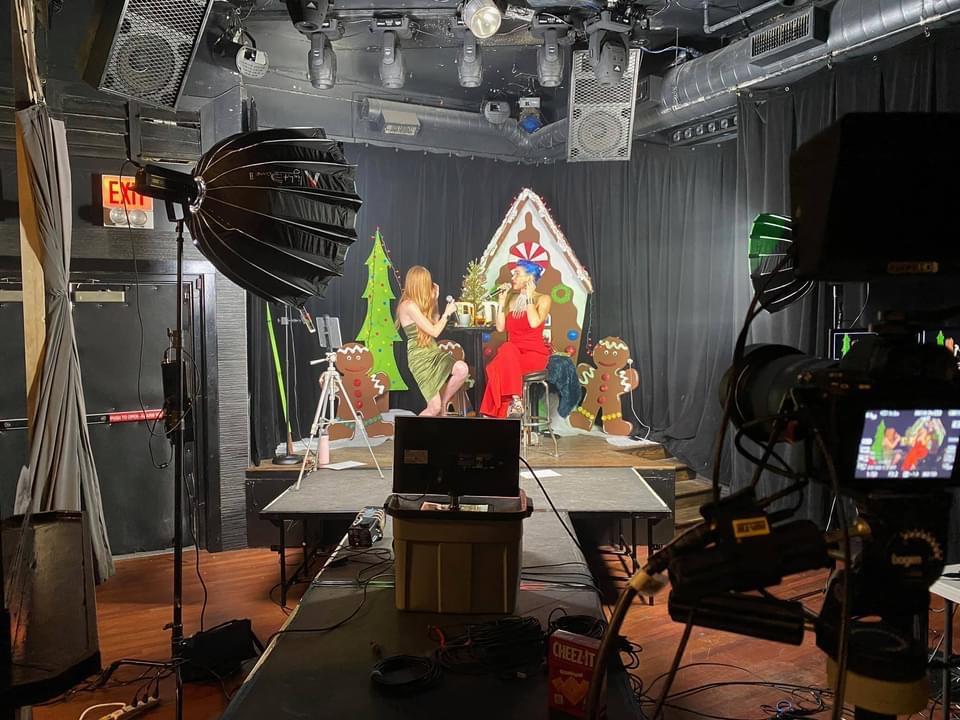 photo credit // provided
The music coming from Hydrate Nightclub on Sunday night, Dec. 20 was festive, not fierce, as usual – but no one seemed to complain.

The Doorstep Divas brought their 90-minute, 17-song set of (mostly) holiday favorites to the heart of Lakeview for some much-needed musical cheer – virtually, of course.

About 150 people watched the live stream and there have been close to 1,000 interactive comments and more than 5,300 people have viewed the show, featuring local singers

“The show went great,” Callinan said. “We were nervous wrecks, but it translated into awkward banter, a lot of fun and some weird moments. Hydrate took such good care of us and SOS Productions made us look and sound like livestream rock stars with their fancy gear.  We almost felt like we were doing a real show.”

Their set featured holiday favorites plus, ugh, let’s just say one truly anti-2020 song, quite fitting for the year.

The most popular songs were “Sisters” from White Christmas and “This Christmas,” as they played up Patti LaBelle’s ‘Where’s my background singers?’ bit.

Another fan favorite certainly was “All I Want for Christmas.”

The two were cheerful and added in a spice of late-night banter. They also had a serious moment, talking about mental health during the pandemic and in general. “(We) urged people to talk to their friends, families, or doctor for help,” Callinan said. “I admit, I’ve had a rough time and had to do just that. And not only are Caitlin and her family big mental health advocates, but she and her husband just lost a good friend to suicide.”

The night ended, fittingly, with Leonard Cohen’s “Hallelujah” while they were holding hands for support.

“Our friends, family and fans were very generous helping us fill our ‘tip jar,’” said Callinan, who confirmed that 10 percent of all donations was given to MusiCares to help other musicians in need.

“We are a duo and not able to play with a band right now, so we have no live instruments,” Callinan said. “There are lots of musical interludes in songs, so we play a lot of ‘air instruments.’ During the saxophone solo in ‘The Christmas Song,’ we played the poop sax.  Yes, you read that right.  We both proceeded to play the #$%& out of our poop saxes.”

For more about the always-entertaining Doorstep Divas, go to: doorstepdivaschicago.com