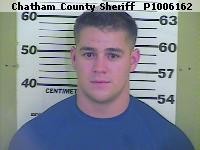 Savannah, GA - Two Marines were arrested and jailed Saturday in Savannah, Georgia after striking a gay man in the back of the head, knocking him unconscious.

According to the Savannah Morning News, police responded to a call around 3:45 a.m. about a man unconscious on the ground. Arriving on the scene police found 26-year-old Kiren Daly motionless with friends performing first aid.

Police apprehended Keil Joseph Cronauer, 22, and Christopher Charles Stanzel, 23, running away from the scene. Both men are Marines and stationed at the nearby Marine Corps Air Station in Beaufort, South Carolina.

Daly said at least one hurled slurs at him as he tried to walk away. That's when the Marines attacked Daly from behind, striking him in the head. Daly suffered two seizures from the blow and remains in the hospital due to bruising to his brain. He is expected to remain hospitalized for several days.

Witnesses and the victim believe the attack was a hate crime.

"It leaves me wondering why Georgia is one of five states that doesn't have a hate crime law on the state level," Daly told the Morning News.

The climate towards lesbians and gays from those serving in the military has grown increasingly tense as General James T. Conway has publicly fought back against the repeal of "Don't Ask, Don't Tell."