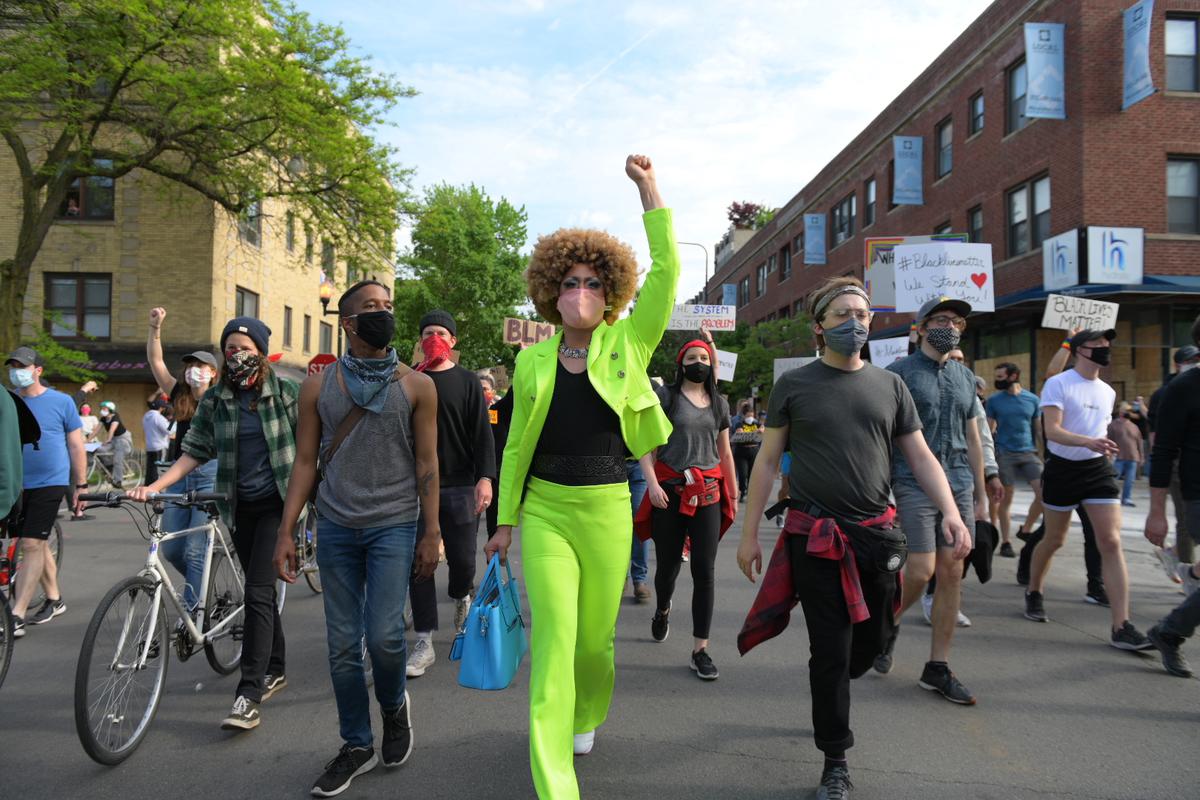 Joe Lewis: ’… queer representation always matters and however I can make that happen is important to me.’

Joe Lewis, whose drag alter-ego in and around Chicago is Jo MaMa, knows exactly what he wants to accomplish at this Sunday's Drag March For Change through Boystown: To bring awareness to the causes and demands that Black Trans Lives Matter and Black Lives Matter, and to help create a safe, self-governed space for people to learn to not be afraid to protest.

“I've always felt a call to fight for what's right,” Lewis said. “My mom always pointed out Ebenezer Baptist Church in Atlanta, where I grew up, whenever we would pass (by); pieces of history from the start of the civil rights movement were ever-present. So naturally it became a huge part of who I am. Also, being a non-binary queer person of color, I don't feel I have any choice but to fight for what's right or because the alternative right now seems to be death (at a) traffic stop.”

Lewis has long endured social injustice and discrimination. At age 5, for instance, he dropped a jar of jelly and still recalls being called a derogatory name. Then, a few months later, when they were getting their first family dog, his dad told him, “a mutt is a mix of stuff no one really wants.”

Lewis, who lives in Chicago's Edgewater neighborhood, has been forced to online drag shows through a cosplay group during the coronavirus pandemic.

“Everything is so charged now and overwhelming. I just knew I needed to do something, to get out there and act,” he said about early-June protests, which saw Jo MaMa strut through Chicago in a neon green outfit and super-sized wig. “I've never been one to shy away from my opinion especially when it feels like there is fear to speak out on an issue and I was choosing to no longer be afraid.

“I've always seen drag as armor and feel that it is tied into my identity. I wanted to make sure my presence was known and through that (outfit), my voice was (heard).”

The march was, he said, “everything and then some.” It was an official activation point for the start of Lewis' place in the movement. He added, “queer representation always matters and however I can make that happen is important to me.”

Just wait for June 14; that certainly will be a mega-sized peaceful march – not a party, organizers stressed – though there will be plenty of sass and high heels.

“The movement is growing in an amazing way and we all have to work to keep the momentum going so that we actually spur lasting, impactful change,” Lewis said.

More than 5,000 have expressed online interest in the Drag March, and the June 14 event is likely to attract way more than that. The Chicago Tribune has reported on the Drag March and it has drawn extensive online support.

“I don't think I'll know if (the Drag March is) successful for years to come. We're part of the wave of change, but I'm really hopeful that it (will) play its part,” said Lewis, who is very direct on their demands:

Justice for Tony McDade; Justice for Breonna Taylor; Justice* for George Floyd; Reclassification of violence against Trans individuals as a hate crime; Civilian Police Accountability Council (CPAC) now; Immediate release of all protesters; and Acknowledgment that Black Lives Matter from all levels of government, specifically the executive branch of the federal government.

Lewis said justice is the immediate arrest and following indictments of all officers whose actions resulted in these unjustified deaths.

Lewis announced June 10 that additional funds are needed for the Drag March For Change, and donations are being accepted on Venmo: @Jomamasayshi. “I have a system of accountability and transparency in place with all remaining funds going to the Black Lives Matter moment and supporting organizations such as The Brave Space Alliance and the Chicago Alliance Against Racist and Political Repression,” he said.

Drag March for Change, a peaceful (non-violent) protest march in support of Black Lives Matter through the Boystown neighborhood, will gather on Sunday, June 14, beginning at 4:30 pm at Belmont and Halsted with the march beginning at 5:00 pm and ending at Halsted and Grace where drag community leaders will speak.

Related: Pride Month in Chicago will look a little different this year