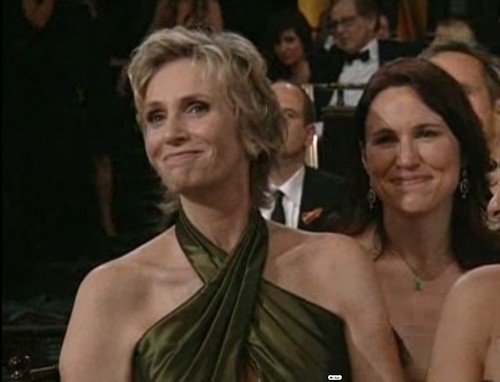 Chicago, IL - On "Glee," actress Jane Lynch has a heart of stone.

But in real life on Memorial Day, she showed her love for all the world to see by marrying her girlfriend, Lara Embry.

They got married in a small ceremony at a restaurant called "Blue Heron" in Sunderland, Mass.


People magazine got the owner of the restaurant on the phone, and she told them the ceremony was filled with love.

"Lara's daughter was there, along with close, close friends of the couple," restaurant owner Deborah Snow said. "It was small, warm, intimate and very sweet. You could feel the love and friendship amongst the group. There were no celebrities or recognizable faces there."

There were just 19 guests at the wedding.

Lynch was born in Dolton, Ill. and went to Thornridge High School and Illinois State University.

Dr. Embry is a psychologist who is known in the lesbian community for surviving a bruising child custody battle with her ex. In that case, both women had given birth to children and adopted each other's offspring to create a legal family. After they broke up, Embry's ex tried to keep her from having any communication with her non-biological child.

Florida courts eventually ruled that Florida must recognize adoptions created in other states.

Same-sex marriage has been legal in Massachusetts since 2004. It was the first U.S. state to legalize gay marriage.