That's "stage door" not "back door" :: Meet the Johnnies 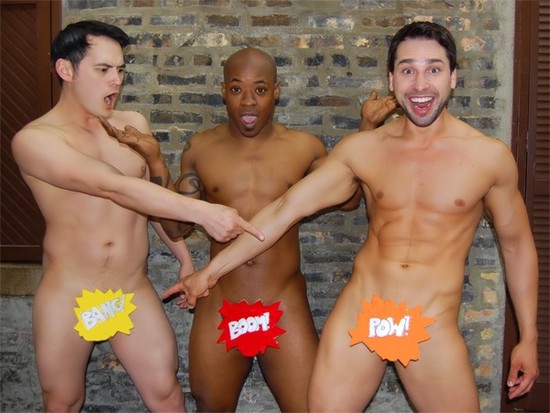 photo credit // anthony meade
The Stage Door Johnnies, Chicago's premier men's burlesque crew, might just be one of the best, if unlikeliest, examples of arranged marriage in the modern world.

The Johnnies, who can be seen taking it off weekly on the stage at Hydrate's Effen Thursdays, first met through gigs dancing back-up to the Windy City king of burlesque and TPAN's Chicago Takes Off co-producer Hot Toddy.

"One day, [Hot Toddy] called the three of us up to meet him," shares Bazooka Joe, one-third of the Johnnies. "We got there, he turned to us and said we had our first gig in three weeks, a photo session next week and needed stage names, personas and numbers by then. It was a real 'throw the baby in the water' introduction to burlesque."

The Johnnies, who borrowed their name from the term given to the male "groupies" to female performers of the vaudeville, have certainly learned to swim quickly. In just over a year since the troupe's inception, Bazooka Joe and his troupemates Ray Gunn and Jett Adore have come a long way since their debut at Roscoe Village's Waterhouse, where the audience reportedly consisted of straight men, their girlfriends and Joe's mother. They say they've formed a family, of sorts.

Sharing the stage and taking tips from names like renowned female dancers including Michelle L'amour, Anna Fur Lexis, the Johnnies are growing beyond their "double minority" status without falling back on any novelty factor of being an all-male troupe within a female-dominated scene. And, as their following grows, the number of mix-ups surrounding their stage name - no, that wasn't "Back Door Johnnies" - have decreased.

"Yes, we're guys doing burlesque, but there's other male burlesque out there that approach it in a very cheeky way: 'Dude, I'm on stage getting naked for you.' And we're not go-go boys either," says Ray Gunn.

"We've studied the classic burlesque performers out there, the women getting down to their merkins and pasties," Gunn continues. "And we want to come up with concepts and costumes that respect that art form without relying on novelty."

And despite their feminine inspirations like Lili St. Cyr and Sally Rand, the Johnnies enjoy mixing their classic, delicate homage to modern burlesque with a masculine, romantic flair. In recent shows, they've taken on icons such as the American sailor, Zorro and a Matrix-like character to put a new spin on the performance of male sexuality.

"The world of female burlesque has a nostalgic, elaborate, theatrical style of strip-tease that's been preserved and made innovative without a real male counterpart," Jett Adore, the self-described "no-pantser romancer," says.

"I wanted to explore the idea of an exaggerated version of male romance, creating a theatrical creature that exaggerates our icons while combining masculinity or something we'd think of as strong or hard and mixing it with something somehow delicate or flowery," Adore adds. "I'm interested in portraying male beauty while still keeping it playful."

And the Johnnies also aim, through their tantalizing performances, to disassociate the idea of shame with nudity.

"We're not used to that level of revealing your body, especially with men, but there's nothing immoral or dirty about the human body. We're indulging in something natural," Adore says. "Burlesque makes that idea more approachable for people."

And ultimately the Johnnies' agenda is simple: Giving their audience a good, sexy tease while honoring and sharing the genre that's inspired them to others. Their performances are infused with surprising reveals, intricate undergarments and plenty of humor to keep the attention of boozed-up onlookers.

"We want our audiences to make noise! We feed off their energy," says Ray. "It's been cool to educate people who aren't familiar with the concept of burlesque while entertaining them at the same time."

While you can catch them on the Hydrate stage and throughout the city in a number of other showcases, these dancing kings have set their sights for more. In the coming months, they will be performing in St. Louis, Milwaukee and New York as they aim to gain face and chest time in front of audiences at some of the world's most prestigious burlesque festivals.

"The big picture for us is to actually make male burlesque a legitimate, respected art form," Ray says.

To see where you catch the Stage Door Johnnies next in action, log on to www.thestagedoorjohnnies.com.