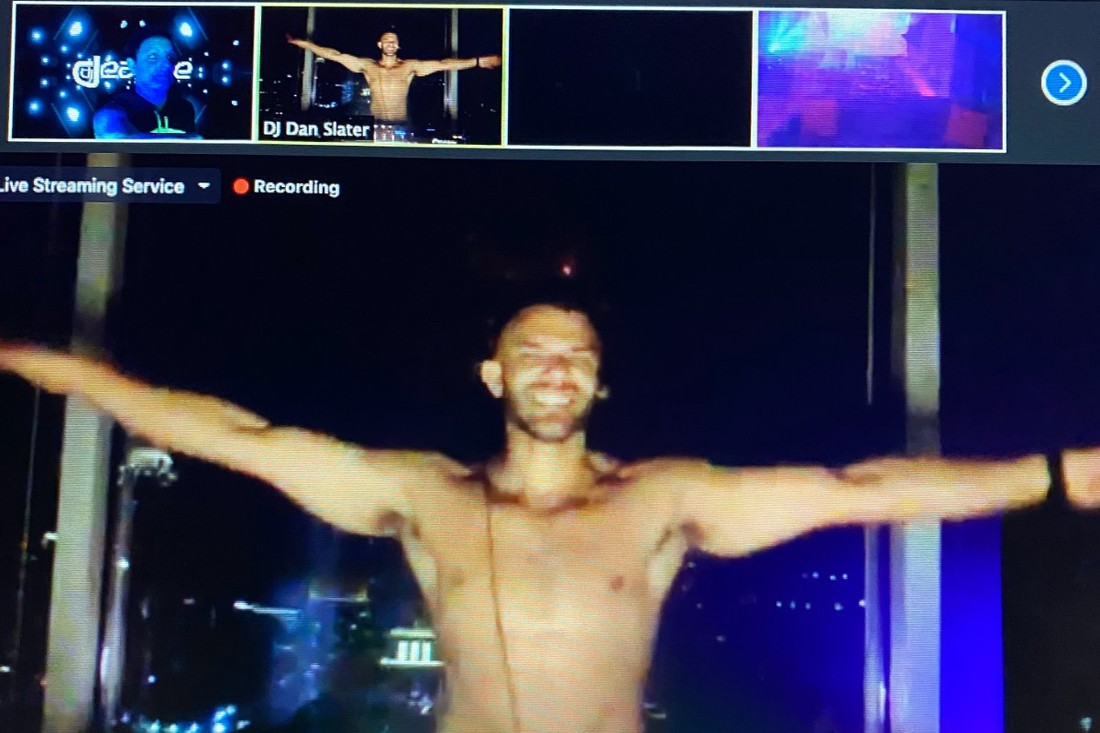 Quarankiki parties have raised more than $17,000 to date, funds to assist staff of Hydrate and Elixir

Thousands of people from around the world danced, at home, during Quarankiki: H2O Festival Edition on Saturday, March 28. The 6 ½-hour virtual dance party, with 3 DJs, raised more than $6,000, bringing the total donated from the two Quarankiki parties to more than $17,000. All funds will go to the staff, DJs and performers from Chicago's Hydrate Nightclub and Elixir Lounge, both owned and operated by LKH Management and now-closed amid the COVID-19 pandemic.

Mark Liberson of LKH said this past Saturday's kiki "was amazing."

"It was inspiring seeing people from around the world joining us, (including) Brazil, Argentina, Canada, Asia, the Middle East and all across the U.S.," he said. "The energy was great, and each DJ created a musical journey that kept people dancing, reflecting, and rising up together. It was magical.

"One of my friends said that dancing for the 6 hours at his house was his first exercise of the week since the gyms (are) closed and he felt alive again being reconnected to the community and to dance. That meant a lot to me and reflected what we were seeing on screen."

Quarankiki: H2O Festival Edition was named for the H2O Festival Puerto Vallarta, which was scheduled for March 27-29, but has been postponed to mid-November. Some of the H2O Festival DJs, instead, brought the kiki beats: Dan Slater, Nina Flowers and Cindel.

"Our industry lost their jobs before any other cutbacks occurred and the people in our industry really need assistance now. Everyone sincerely appreciates the community coming together to support the members of our team who are out of work during this crisis. It really means a lot," Liberson said. "While we did receive some donations that were over $100, the real oh-my-gosh moment of the donations was the impact of all the small donors uniting together to have a great impact.

"People gave what they could; (they) wanted to support the staff, the DJ's and the performers in our community who are out of work during this crisis."

Charlie Hegstad, 26, a corporate account manager, has danced at his San Francisco home during both Quarankiki parties. He was to have celebrated his birthday in Puerto Vallarta. Instead, he was camped out in California – at home.

"I love the virtual dance party idea; it's a great way to give people the fun they want while staying healthy and safe at home," Hegstad said. "It was great to see so many familiar faces, and new ones, from all around the world.

"I love seeing everyone smiling, having a good time and able to take a break from the chaos of the world."

Liberson said the DJs created a night that was both inspired and inspirational.

"They united everyone and raised everyone up," he said. "People (wore) costumes, showed lots of personality and attitude. Some were alone, others with their partners or their roommates.

"The Quarankiki dance floor was spread around the world, yet you really felt as if you were there alongside everyone. I thought our production team at Hydrate did an amazing job moving (the stream) from home to home, bringing everyone together, which is what makes this experience so unique and special."

Signs were aplenty during the kiki.

There were signs of solidarity, signs encouraging safe behavior, signs saluting the DJs and signs sharing love for the community. "It was awesome how people brought what was in their mind to the event through electronic signs, hand-written signs, artistic signs, and simple messages held up to their cameras," Liberson said.

"Our community comes together in times of crisis through our music. While putting together this event has been a tremendous amount of work, seeing the amount of happiness and support people are getting by being together, even though it is virtual, makes it worthwhile. It lets people in our community join together and raise each other up and perhaps forget about this disease for a little bit to relax, dance and feel alive. (The kiki) brings back a moment of normalcy at this very abnormal point in time.

"It is not only our physical health that is important, but our mental health, too. And I believe this reconnection to our community through our music and dance is healthy. We remain people and need this type of positive energy in our lives. We also realize that people don't always think intelligently, and we have worked to remind people to enjoy this moment safely as we are still in a crisis and we want to stop the spread of this disease."

The main message from Quarankiki organizers was to stop the spread of the disease by not bringing people together and, instead, to be together virtually."

Quarankiki returns this upcoming Saturday, April 4, featuring DJs Tom Stephan (London), GSP (Athens) and Deanne (Miami). On April 11, the Quarankiki will spotlight the sounds of DJ Toy Armada (Philippines), DJ Grind (Portland), and one more DJ yet to be announced.