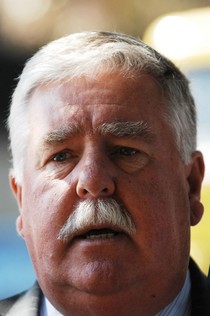 Sydney, Australia - An Australian lawmaker has quit after being caught by a TV station visiting a gay night club.

"What I will do is work through these issues with my family," Campbell said. "These are some choices that I have made. They have caused a great deal of embarrassment."

The television station justified the report by pointing out that Campbell drove a taxpayer funded car. Later, the news director acknowledged that Campbell's use of the car did not break any rules.

Campbell had already been under attack for a traffic management debacle during which some drivers were trapped for more than 12 hours on the F3 freeway north of Sydney by a car accident. There had been some speculation that he was at the sex club during the chaos, but phone records show that was not the case.

"Whether he is gay, bi, curious or confused we need to appreciate that anyone of his generation grew up in a very homophobic Australia, both in terms of social attitudes and laws," Alex Greenwich of Australian Marriage Equality told samesame.com.au.

"This man has dedicated much of his life to public service, and without any understanding of the psychological issues associated with someone of his generation being able to be comfortable with his sexuality, he is being condemned by the media for walking down the stairs of a gay establishment," Greenwich said.