Harvey Milk remembed in Chicago and across the nation 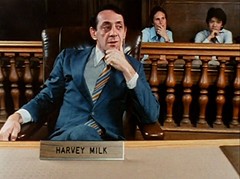 Chicago, IL - Today would have been Harvey Milk's 80th birthday, had he not been slain by Dan White in 1978.

Harvey Milk, was the first openly gay elected official in the US when he was won a seat on the San Francisco Board of Supervisors in 1977.  Just 11 short months later he and Mayor George Moscone were savagely murdered in City Hall by Dan White.  White was later convicted of manslaughter rather than murder when he used the defense that he was "high on sugar" and was therefore 'incapable of the premeditation required for a murder conviction.'

Chicago's LGBT community, joined 25 other cities across the country today in observance of what would have been Milk's birthday, with a gathering in Grant Park.

Today's event and march was the culmination of 'Chicago's Harvey Milk Week of Action' a busy week of action organized by LGBT Change, Join the Impact Chicago and the Gay Liberation Network.

This week, gay-rights activists stepped up protests at the U.S. Capitol and in front of legislators' district offices, including the Chicago district office of Illinois Senator Richard Durbin.

Gay-rights activists continue to pressure congress to pass ENDA and repeal 'Don't Ask, Don't Tell,' the ban on gays and lesbians serving openly in the military.

Michael Lehet contributed to this report.