CircuitMOM Productions had its biggest, best year ever in 2019 – and will be even grander in 2020 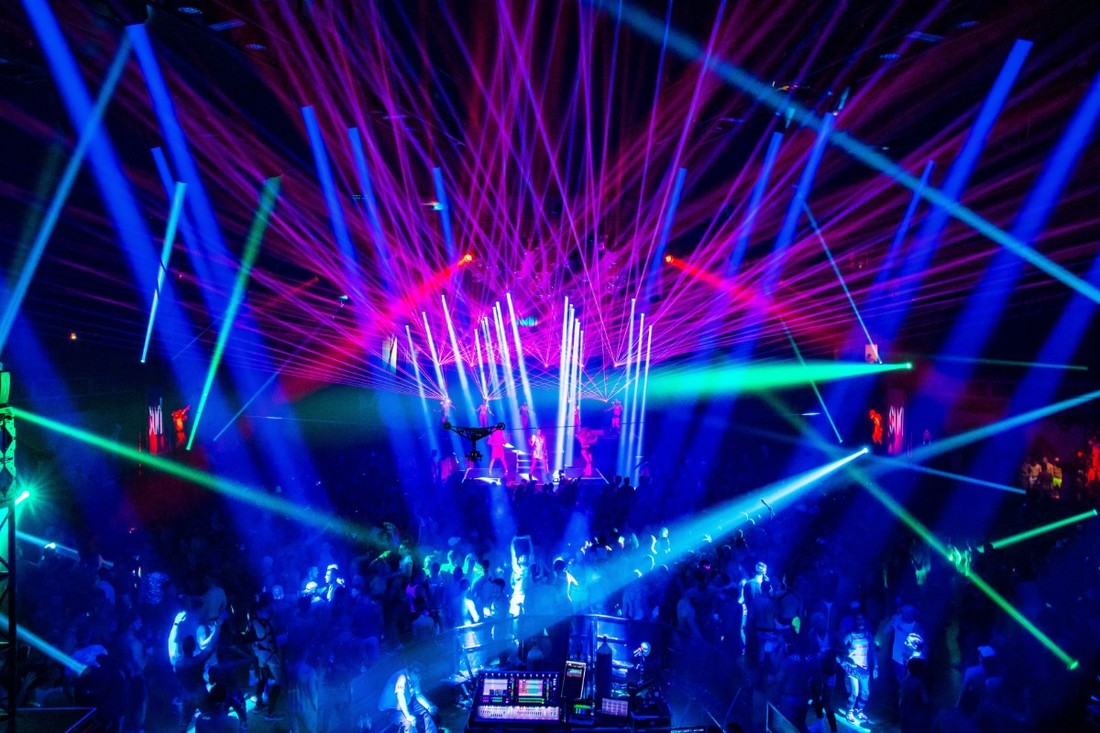 Plenty of glitter planned for 2020 from Matthew Harvat and his energetic crew - View 2019 recap video below!

Matthew Harvat and his team delivered 12 CircuitMOM Productions-branded parties in 2019 with, combined, more than 15,000 tickets sold. He acknowledges, it's a total that "is just crazy." But there are several more memorable statistics, so to speak, from their 2019 circuit parties.

His production team grew to over 100 people for the year.

"What an amazing year 2019 turned out to be," Harvat said. "You never really know if people are going to get on board with your ideas and themes, but we seemed to strike a great balance between new ideas and our established brand identity (which) people have come to expect. We took some risks this past year that luckily paid off. Not everything was perfect, but for the most part, things went really well."

The nonstop beats at a CircuitMOM event mirror their nonstop planning, preparation and details for every party. Nothing is left to chance. Even if it's just one song, such as what Harvat performed at "Haunted Hollywood II" over Halloween weekend, drawing a huge response.

"My costume, created by the amazing Joshuan Aponte Designs was the classic 'Glinda, The Good Witch' from 'The Wizard Of Oz,' but my makeup, also done by Aponte, looked like the 'Wicked Witch of The West' was taking over Glinda from the inside and turning her evil," Harvat said.

"The song 'Wanna Drop A House' by Urban Discharge was released in 1995 and was turned into a massive circuit party anthem by the remix duo Razor N Guido a couple years later. In 2009, DJ DeMarko! did his own take using the Razor N Guido mix, which is what I used for my show. People went crazy for it wanting to know, 'What is this new song?!'"

Harvat heard about that song for weeks.

"With all of our projects, we start with really big ideas, concepts, talent wish-lists and surprises we would like to make happen," he said. "Sometimes things work out and sometimes we get a hard 'No,' or no response at all. It's part of the game. We were really close to landing some big-name vocal talent in 2019 for some of our events, but with World Pride in New York City this past June showcasing just about every major talent known to the gay world, we lost out on bids. Most marquee artists will only do one big, gay event a year, if at all, and New York won. But, we will keep trying and wait our turn."

Three world-renowned DJs made their CircuitMOM debuts in 2019, and Chicago's own DJ Ale Maes, a rising star on the scene, spun three different events for MOM, including the new IML Saturday night party, 'Stampede.'

DJ Suri, from Madrid, was the co-headline DJ for the Circuit MOM Sunday night 'Drama at the Disco' event during Market Days weekend and the DJ Ana Paula also came from Madrid to headline MOM's return to Halloween at the House of Blues.

Plus, DJ Dani Toro came to Chicago for the new party, 'Sundae,' which was MOM's first partnership with Ryan Willing and Organized Grime. Toro spun alongside classic Chicago DJ's Teri Bristol and Psycho-Bitch.

Abel Aguilera and Ralphi Rosario (DJ's Rosabel) returned for a second year to headline the Saturday night of Market Days at MOM's 'Comic Book Hero' party, and DJ Hector Fonseca brought the house down at the closing 'Drama' party.

"We had a lot of spectacular producers work with us in 2019," Harvat said. "DJ Karsten Sollors released some of the best house tracks of the year in 2019. DJ Tony Moran added two more No. 1 dance singles to his illustrious career and Tom Stephan took our IML 'Black & Blue' closing party to a whole new level with his masterful sound.

"I finally got to work with DJ Dom Brown twice in one year for our own events, which was amazing and none of our parties could open up with anyone better than Chicago's very own DJ Ron Geronimo."

MOM's 2019 momentum leads into 2020 and a new decade that, no doubt, will be bigger, louder, wilder, sassier and way more over the top.

"Planning our (2020) events gives me a lot of joy and something positive to focus on every day of the year," Harvat said. "Our main goal for this year is to continue to grow our diverse audience and develop more community-based entertainment options outside of our dance parties. We are proud to be a producing partner for the Halsted Street Halloween Parade, which truly brings the entire community and its allies together. We are working on a few new things to build on that idea (in 2020)."

Harvat confirmed that CircuitMOM will be adding new events in 2020, and he quickly predicted that, when Chicago celebrates Pride during the last weekend of June, "it is going to be one of the best the city has ever seen," he said.

Way before summer rolls into town, MOM will bring an ice dancing fantasy event to Chicago. "We are working on a big, Frozen (see what I did there?) ice skating party with drag queens and DJs and sequin tights," he said.

CircuitMOM events also will have some new DJs in 2020, Harvat confirmed. Many of the popular crowd-favorites will be back, too.

"We can always be better," he said. "Every year we learn more and more, and listen to our guests on what we can do to improve their experiences, (to) keep them coming back," Harvat said. "It is impossible to please everyone every time, but we work hard to evolve, change and get better. Sometimes far in advance, but often times right in the moment an issue comes up.

"There will be more themes in 2020, more locations and more talent added to our roster than ever before. It hurts my head to think about everything, everyone and every place, but that is why we have the best team working every day to make our events the best we possibly can."

Harvat admitted, he was very reluctant to the idea.

Eventually they recorded two episodes as a test.

"Once I heard them, I felt like there might be an audience that wants to learn about what goes on behind the scenes with not only our events, but other promoters from across the globe," Harvat said. "Plus, we will bring exclusive music debuts, artist interviews, DJs sharing their stories and craft, drag queens, go-go boys and more. I have been doing the circuit scene since 1992, so I have a lot of history I can share, too."

The plan is for a bi-monthly circuit-driven podcast.

To listen to the inaugural podcast, go to circuitpod.libsyn.com or echoeffect.org/circuitpod.

The podcast eventually will be available on major outlets, such as iTunes, Spotify, Google Play, etc.

CircuitPOD will be hosted by Harvat (CircuitMOM), Edwin Martinez (CircuitSON) and special guest hosts every episode. Their first co-host is Aunty Chan, who also does live reporting with a film crew from MOM events. "She is fearless ... . and ruthless," Harvat said.

CircuitPOD will be executive produced by EchoEffect. The producers are Adam Decker and Jared Smith; the editor is Adam Decker; and the production assistant is Graham Hawley.

"I think there (is) an audience (that) wants to know more about what goes into the making of these events, where they came from and where they are headed. The history part is interesting, especially when you get into the evolution of these things being small parties in someone's home to 20,000-person stadium events," Harvat said.

Harvat confirmed that CircuitMOM Productions will be back for its 22nd year producing the three official dance parties for IML weekend.

After taking 6 years off, MOM is jumping back into the Pride Weekend party scene in Chicago.

CircuitMOM Productions dates back to 1998.

"I told everyone when I started doing drag at 32 that I would be done and retired by 40," he said, laughing. "Here I am in 2020, now 55, doing bigger shows, bigger productions and bigger venues than I could have ever imagined. It is crazy to think this persona and brand is still out there shaking a sequin onstage.

"It is quite the honor to still be accepted and supported after so many years."

CircuitMOM Productions released a near-4-minute highlight video showcasing its 2019 – and it certainly will push returning attendees to attend all MOM events in 2020, and also, perhaps just as important, motivate others to attend their first CircuitMOM party in 2020.

"Our first, full-length recap video from the 2019 season brings me so much pride," Harvat said. "So many people are responsible for those events in that film and the hundreds of hours of footage our team went through to pick a few moments to share with the world is really magical. Steven Koch worked for weeks on that project and he truly captured our year with so much energy and confetti. But, like I say in the video, none of that would be possible without all the people out there supporting our efforts and vision.

"Come experience life on a grand scale, filled with music, joy, love and acceptance ...and plenty of glitter."