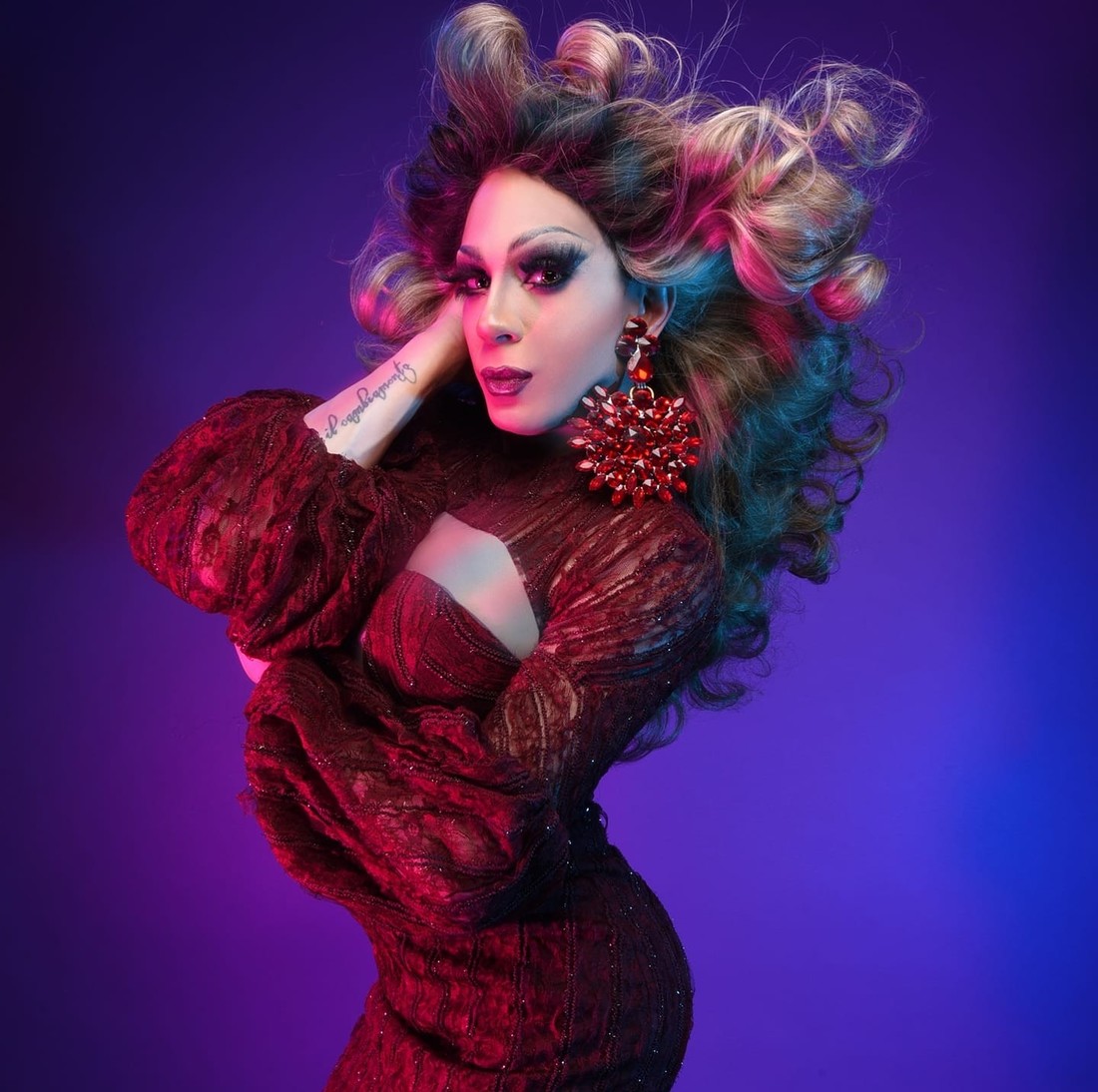 photo credit // facebook
David Jade Sotomayor grew up in Chicago's Humboldt Park neighborhood, which has long been anchored on its Puerto Rican pride – and of course plenty of flags to represent the sun-filled island. There is even one giant Puerto Rican flag at both ends of the main strip in Humboldt Park called, Paseo Boricua.

Flash-forward to 2019 – Sotomayor has certainly grown, blossomed and shined. In fact, this proud, out Chicagoan who celebrated his 36th birthday on Nov. 18 is also wrapping up the year with two milestone career accomplishments.

Sotomayor has been entertaining for 20 years and, it was 10 years ago this past February, when he shot to worldwide fame and fortune on season one of RuPaul's Drag Race. Sotomayor ultimately finished sixth and BeBe Zahara Benet was the winner.

"I never realized how quick time can fly," Sotomayor said. "I'm always so focus on what next to do I (don't usually) give myself time to really enjoy the present, (and now) two decades have passed.

"If I can give advice to anyone, it is: (do) not stress on tomorrow, live in the now, and don't forget your past.

"These past 20 years have truly been a blessing. I've been able to do a lot of amazing things – from dancing, acting to drag, and more; I've performed at block parties on the street and at the Apollo in New York to concert halls across the world, plus so many TV projects and films."

Sotomayor said his early years stand out, particularly those he worked with. "We literally grew up together," he said. "(That) was when I was truly was the happiest, with no cares in the world."

Sotomayor broke out in early-2009, under the RPDR spotlight. He was the lone Chicago representative that season, which also included Nina Flowers.

Sotomayor's road to RPDR was led by Monica Beverly Hillz, who told Sotomayor about the audition and said she really believed Sotomayor could do it. "That meant a lot and I went for it," he said.

Ten years later, and beyond, Sotomayor will always be a RPDR Girl.

"I enjoy when fans get so happy to hear stories," about the show, he said. "I really love my Gems; they are the reason I perform."

Sotomayor said he is in contact with all but one of the season one contestants, particularly Ongina and Nina Flowers.

When asked about RPDR nowadays, he said he has "mixed emotions."

"I'm proud to (have been on) season one, but damn these girls got it so good now – from production value to cash prizes," he said.

Would you appear again on RPDR?

"I don't think the world gets to see much of what I have to offer by watching season one ...and it'd be nice to get some redemption," he said.

Sotomayor hosts every second Saturday of the month at Hamburger Mary's in Andersonville, along with Monica Beverly Hillz and Dida Ritz for two shows – at 7:30 and 9:30 p.m.

"I look forward to every month to work with my Ru Sisters for all the fans. We play games, (do) trivia, contests and more ...it is so much fun."

The outgoing, flamboyant, confident entertainer of 2019 is certainly different from 20 years ago. Let's jump back to his night one.

Sotomayor had just out a week prior and needed help from Naysha Lopez to look oh-so-glamourous for a show Sotomayor was booked on.

"I wore my girl's outfit and her mom's boots. Naysha did my makeup and (loaned) me her foam hips," he said. "I wasn't nervous, (but rather), super hyped.

"I remember going way too full-out like a dancer I am. Naysha came and tipped me and whispered to calm it down a little. I realized then the difference (between) just dancing choreography to dancing (and) connecting with the audience as a Queen.

"It was so addicting, feeling all the energy from the crowd."

Sotomayor said he is now more cautious about many things, especially in business. On the same token, he also has learned to be more understanding and patience, he said.

"I continue to perform and act, to be part of various independent films and TV shows, such as 'Deadly Affairs' with Succan Lucci. Most recently I was cast for a feature role for FOX' new TV show 'Proven Innocent' and multiple appearances on Empire,' 'The Chi,' 'Work in Progress,' as well as movies.

He is not as fearless, but more experienced.

"I have a mix of feelings but am very pleased in all I've been so blessed to accomplish – from being the first drag to be crowned Ms. Paseo Boricua in Humboldt Park to be a pioneer on the first season of RuPaul' Drag Race.

"Being part of such a phenomenon has opened the doors for so many (from the) LGBT community and (beyond). It's so amazing to be able now to see a 4-year-old prancing around DragCon in a princess dress holding his father's hand, who is explaining to me his son's drag esthetic. That is mind-blowing and so rewarding.

"When I started drag, it was very taboo. People enjoyed watching us queens, but no respect otherwise. Gay guys would not want to date because I did drag. It was kind of upsetting, but I didn't really care too much because I was so deep involved with my dance career which was just kicking off. (I) was touring Europe and handling newspapers (for interviews) and all, but it would still hurt not to be cared for or seen as serious because I did drag."

Sotomayor added: "After RPDR being introduced, people really got to see drags as professional artists, not clowns or any of the other horrible stigmas attached to drag."

Sotomayor said he doesn't have any regrets, personally or professionally, nor would he have changed anything. "I've learned something valuable out of every bad mistake," he said.

And then there's Hush Hush – the song from the Pussycat Dolls. Sotomayor performed that hit everywhere for about five years in a row.

Eddie Sotomayor Jr., 34, was among those killed in the Pulse Nightclub shooting in Orlando. He was David's cousin.

Eddie worked for a company that held gay cruises and often traveled to promote the company's events.

"He would always find a way to catch me whenever we were in the same city," David said. "One time, he surprised me and made me tear because he broke his leg, so I knew, or so I thought, he wasn't going to make it. Then I see him with crutches and this big 'old cast hoping thru the entrance of the bar. I was so happy. Eddie was, to me, at the beginning of my career, the only family I had that I could count on to be happy, outside of my mother and siblings. He was the only one who was gay as well. He always made sure I knew how special I am and always was proud of who I am, what I have accomplished and all that I was going to do. He was very special to me and we had a very sweet and completely private relation, meaning, we always did things on our own.

"My RuSisters got to know him through the (cruise company) where Eddie was hired. He was just so special, with a heart of gold."

Sotomayor did a show dedicated to Eddie in Florida after the Pulse killings. Plus, he made a speech for him and the other Pulse victims at the Trailblazer Awards.

Relationship Status: Single – "(I have) had a couple boyfriends, years ago; none lasted longer than three months. I'm definitely hopeful to find that one."

On Jennifer Lopez, which is where Jade came from: "I went to see her with my RuSis Carmen Carrera and good friend Divo in Las Vegas, with front-row seats. I was so over the moon I went dressed like her and she sang a quick sec to me; I have the pics and video I show and tell constantly. I've seen her a few times (overall).

Representing Chicago: "It's amazing being a part of Chicago history. I was nominated as an Asiprante of the Year from Aspira, which is a nonprofit organization whose mission is to empower the Latino community through advocacy and the education and leadership development of its youth." Sotomayor also was named to the annual Windy City Times' 30 under 30.

On Spin Nightclub, the now-closed Chicago bar: "Spin was my first real home bar (and) I worked there for a few years. It was awesome to see how big I and team made it out to be. It was the hot spot to be. Unfortunately, management was changed, and I was released (as) show director. After that they destroyed what we started, resulting in having to close. It was sad to see something so good be destroyed. But like everything, time changes and you must move on to other projects. But Spin, while I was directing the shows, was such an amazing time. I was able to consistently bring all the RuGirls (to Spin); it was so much fun."

The LGBT Community: "I'd like to use my platform to help spread awareness and help the youth more. I'm hoping to work with organizations that can get the most out of what I can offer to advocate and share my stories."