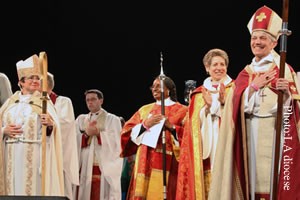 A crowd of over 3,000 lined into the Long Beach Arena to witness the ordination of the Rev. Mary D. Glasspool, of Baltimore, as suffragan (assistant) bishop of the Los Angeles diocese during a three-hour service, themed Rejoice!

Glasspool, 55, whose nomination was approved by the majority of the church's bishops and standing committees in March, has been in a committed relationship with Becki Sanders for over 22 years.

"The world's transformed only if we turn to each and every one of our brothers and sisters and see the face of Christ superimposed on them," Los Angeles Bishop Jon Bruno, a co-consecrator, told the audience. "The ones we disagree with the most are the ones we're obligated to share our lives and teach the most.

Two protesters rose to protest Glasspool's installation. One man disrupted the service just as it was about to get underway. He was escorted out of the building as he shouted about the need to repent and held up a sign that read "Do not be deceived, homosexuals will not inherit the kingdom of God."

Glasspool has acknowledged that her ascension would not be welcomed by everyone.

"I am … aware that not everyone rejoices in this election and consent, and will work, pray and continue to extend my own hands and heart to bridge those gaps, and strengthen the bonds of affection among all people, in the name Jesus Christ," Glasspool said in March.

Among the bishops in attendance was New Hampshire Bishop V. Gene Robinson, who became the first openly gay bishop in the church in 2003. Robinson, 62, lives in Weare with his husband Mark Andrew.

Robinson's ordination created a deep divide between the 77 million-member Anglican Communion and its more liberal American branch, the Episcopal Church, and led to a self-imposed moratorium on the election of gay bishops.

The church reversed course last July when it voted in favor of lifting the ban at its general convention. Within six months, the Los Angeles diocese had nominated Glasspool.

Archbishop of Canterbury Rowan Williams, the spiritual leader of the Anglican Communion, called Glasspool's election "regrettable" and suggested the Episcopal Church's moves threaten the bonds between the two churches.

However, the church is not backing down. A gay priest is one of four finalists vying to replace retiring Bishop Carolyn Tanner Irish of the Utah Diocese in a special election to be held May 22. The Rev. Michael L. Barlowe married his husband in San Francisco during the narrow May-to-November window in 2008 when gay marriage was legal in California. If elected, Barlowe would become the third openly gay bishop in the church.

Conservatives in the church opposed to openly gay clergy have formed a rival church, the Anglican Church in North America.