Florida GOP not happy about gay joke in Crist auction 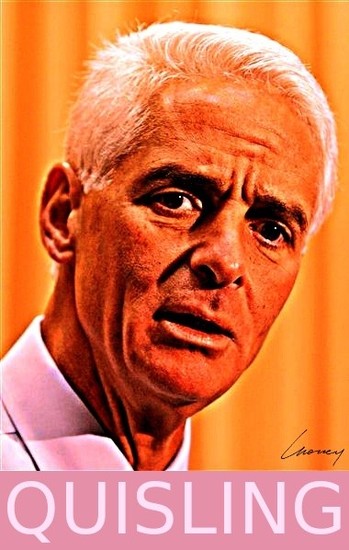 eBay sale compares him to other scandal-plagued gay politicians

Tallahassee, Florida - The Florida GOP says they're planning to dump a portrait of the formerly Republican Governor Charlie Crist on eBay. But the one that went up for sale on April 30 isn't theirs.

The Florida GOP cut ties with Crist last week after he announced he's going to run for Senate as an independent. They're removed his signature from their letterhead. And they announced they'll be selling a $7500 portrait of him on eBay.

Shortly after that announcement, a Crist portrait being sold by someone claiming to be "florida_gop" went up for auction on eBay.

"Have you ever taken over a non-profit organization only to be left with huge AMEX bills and ugly portraits of the folks that looted the place?" the description reads. "Well, we've got some debt to pay down and unwanted `art.' Scott Rothstein commissioned this beautiful, GIMP crafted, artist signed, original portrait of Florida Governor and US Senate hopeful Charlie Crist. This classic work captures the essence of Crist and will complete your portrait collection of political heroes like Larry Craig, Jim McGreevey, Mark Foley, and Bob Allen!"

All four of those politicians left office after being caught up in gay sex scandals.

The real Florida GOP plans to put their portrait up for sale on Monday. In the meantime, they're trying to get the fake sale removed.