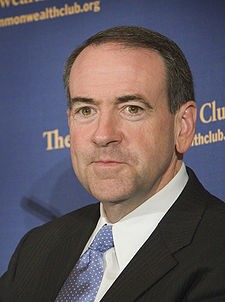 photo credit // en.wikipedia.org/wiki/mike_huckabee
The war of words continues between Governor Mike Huckabee (R-Arkansas) and a student newspaper in New Jersey.

He also said he's opposed to gay adoptive and foster parents. "I think this is not about trying to create statements for people who want to change the basic fundamental definitions of family," Huckabee said. "And always we should act in the best interest of the children, not in the seeming interest of the adults. Children are not puppies. This is not a time to see if we can experiment and find out, how does this work?"

On his website, Huckabee now says the school paper "grossly distorted" his comments. "The young college student hopefully will find a career other than journalism," Huckabee wrote.

"It is telling that nowhere in his statement did Huckabee suggest he was misquoted in the article, and rightfully so; we have the audio and transcripts to prove that everything reported is accurate," responded Perspective Editor M. C. Tracey. "This sort of desperate tactic is not surprising, however; politicians in damage-control mode often stoop to attacking the media so they might avoid being accountable for the substance of their remarks."

You can listen to the interview and judge for yourself.