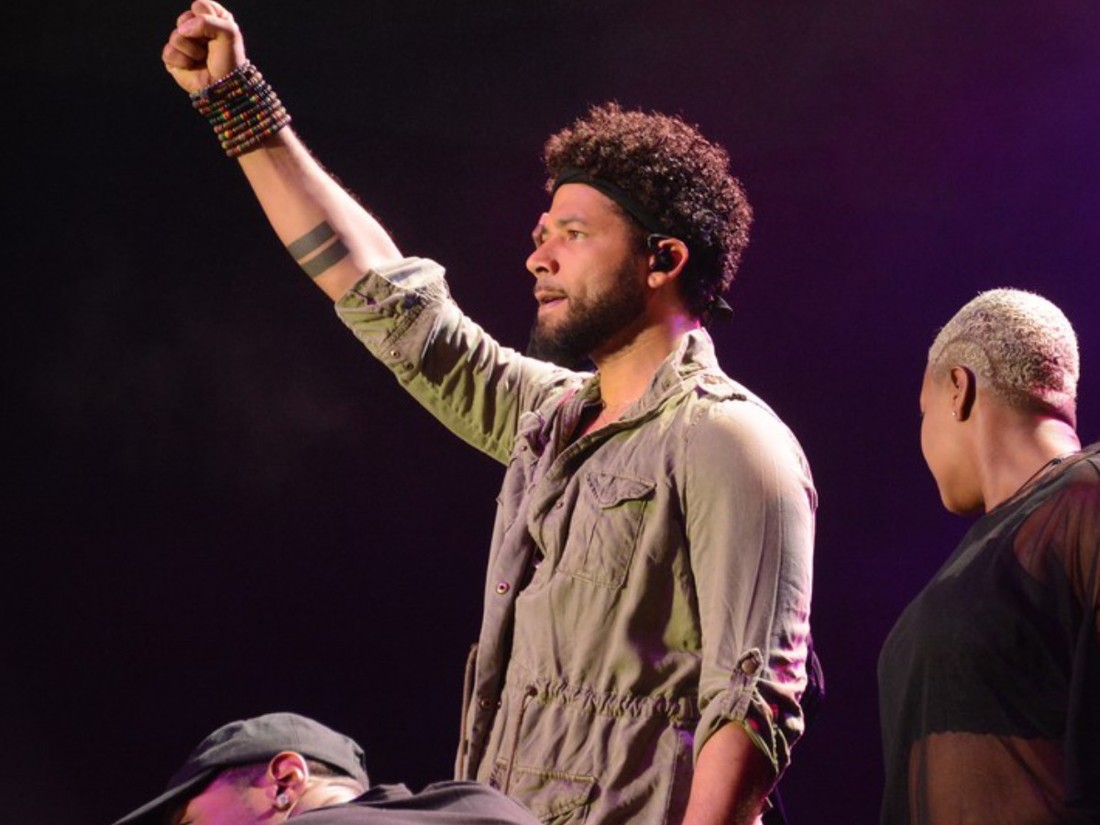 jussie smollett at milwaukee pridefest in 2018

photo credit // ken brown/gopride.com
Chicago, IL - With the Thursday morning announcement by Chicago police that "Empire" actor Jussie Smollett sent a threatening letter to himself and paid two men $3,500 to stage an alleged hate crime attack against him, some people - particularly conservatives - have taken a near-celebratory tone.

"The Jussie Smollett case...is just the latest example of how desperately media elites want to confirm their favored narrative about America: that the country is endemically and lethally racist, sexist, and homophobic...," wrote conservative author Heather Mac Donald. "The truth: as instances of actual racism get harder and harder to find, the search to find such bigotry becomes increasingly frenzied and unmoored from reality."

Mac Donald was joined by a slew of other right-wing figures in mischaracterizing the careful reporting of the alleged attack, many of whom demanded apologies for President Trump and his supporters.

However, this bad-faith argument - that conservatives are the real victims - belies the fact that hate crimes are, in fact, an increasingly serious problem. Since 2015, the latest FBI data shows hate crimes have risen year after year. There was a 17 percent rise in hate crime reports between 2016 and 2017 alone. Those statistics only count the crimes law enforcement volunteers to tell the FBI about, the actual number is likely higher.

Those numbers come as no surprise to Ezra - who requested his full name not be used - a transgender man who told GoPride.com his repeated abuse at the hands of a transphobic roommate in the Pilsen neighborhood culminated in a beating so severe he can't remember parts of it.

"I lost about one-to-two minutes of memory, but remember he came close and thrust his palm into my jaw. He is about 6'4 and I weighed about 86 pounds," Ezra said. "I, um, relieved or soiled myself which has got to the most embarrassing thing."

Trapped in a toxic situation with his abusive, threatening, former felon roommate and an unsympathetic landlord, Ezra was essentially a prisoner in his own apartment. Despite the very real fear of retaliation, he did eventually go to the police, who took his problem seriously. "The guy at the desk treated me with respect and kindness," he added.

Speaking on the allegations against Smollett, Ezra called them "disappointing."

"Victims already have a ton of reasons not to report," Ezra said. "But one of the scariest is not being believed by those who could or can help us."

Those sentiments were echoed by Zander Bueno, another transgender man who showed GoPride.com screenshots of the anti-trans messages he is bombarded with across multiple phone numbers.

"Well, there are very real impacts. Unfortunately, in Chicago, such attacks are very real in the community," said Bueno, who also had a brick thrown into his suburban Niles home, smashing the front window in what he believes was a related attack. "We are already ostracized and having this negativity in our lives makes it feel as if we're drowning without hopes of ever getting a small breath of air."

Smollett, who is black and openly gay, claimed two men wearing ski masks targeted him during the early morning hours of January 29, shouting "Aren't you that f***ot 'Empire' n*****?"

He told authorities the men poured an unknown chemical substance on him and wrapped a rope around his neck- a longtime symbol of white supremacist lynchings- before fleeing. After their rampage, he claimed the attackers cheered "This is MAGA country!"

Smollett became indignant during a televised interview shortly after the incident over suggestions that he made up the attack. "It feels like if I had said it was a Muslim or a Mexican or someone black I feel like the doubters would have supported me a lot much more," Smollett told ABC's Robin Roberts. "And that says a lot about the place where we are as a country right now."

That story quickly fell apart after police revealed the "attackers" were allegedly paid by Smollett and the attack staged because he was "dissatisfied with his salary." If convicted of filing a false police report, he could face one to three years in prison and be ordered to help recoup the costs of the investigation. Police declined to give GoPride.com a cost estimate of the investigation, but did say there were twelve detectives working the case originally with that number fluctuating throughout the course of the investigation.

"This time and the resources [used during the investigation] we'll never get back," said Chicago Police Superintendent Eddie Johnson said during a Thursday morning press conference at police headquarters.

"They do harm to every legitimate victim who is in need of support by police and investigators, as well as the citizens of this city," he said.

Speaking through his attorneys, Smollett has consistently denied the allegations against him.

Related: Jussie Smollett paid $3,500 to stage his attack, according to police