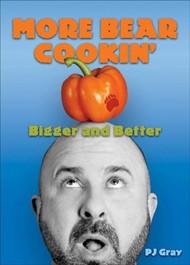 Gone are the days of cold and hot mediocre porridge at the Bears’ House. With the introduction of Haworth Press’s Bear Cookin’, series, upon Goldilock’s unlawful entry, a much more decadent and diverse flavorsome fare would be found for the filching. Yet with the high fat and carb content, and social pressure on young little blonde girls being what it is, she might just go straight to pilfering the pillows, if she can resist the deep fried twinkies – And we’re not talking little boys.

Bear Cookin': The Original Guide to Bear Comfort Foods, authored by PJ Gray and Stanley Hunter in 2003, yielded a huge national buzz in both the press and gay communities. Scandalous to health food fanatics, but refreshing to those tired of the Styrofoam, tofu and Pam spray pretense, this cookbook appealed to the LGBT community, the Bear Subculture and the mainstream, all ready to engage in comfort food offerings simply for the comfort of it all.

In the wake of Bear Cookin's popularity came a want for more. Haworth Press responded and announced PJ Gray's solo work, More Bear Cookin': Bigger and Better, as the second installment to the Bear Cookin' series. It’s slated for release on November 1, 2005.

With his busy essayist, columnist, novelist and Bear socially obligated life, author PJ Gray took a break from preparing his famous (or is it infamous?) Chocolate Gravy, Baby, to tell us what’s in the stew. But do we really want to know?

JF: So PJ, in what ways do the bear community and comfort food coalesce? How does the Bear life influence your culinary choices?

PJ: That's a good question because the Bear community is far more diverse than most people think. Often, people, especially other gay men, think that all Bears are very heavy and hairy and that is simply no longer the case. The Bear community is known and proud to be very inclusive which allows for diversity in physique and appearance. I mention this first because not all Bears eat exactly the same. For example, "Muscle Bears" eat differently than other Bears who prefer to not spend any time at a gym. There are also Bears who have dietary restrictions. Despite the differences within the group, I've learned that many Bears love to eat and cook and many don't care to obsessively count calories. They live and eat and love with passion. I've known many Bears before creating the cookbooks and learned that there was a connection to Bears and the appreciation for enjoying hearty, home-style foods. For me, that defines what comfort food is. Hence, the collection of these kinds of recipes directed toward the Bear community. Of course, the beauty of "comfort food" is that most everyone can relate and appreciate it as well. It's hard to find anyone who doesn't love it in one form or another.

JF: Why More Bear Cookin’? What inspired the second installment?

PJ: I left so much out of the first book because I was worried about pitching a cookbook of a reasonable size to a publisher. I had so many more recipes to share. In addition, I wanted the second book to be more comprehensive so I added the necessary food-related information to make it a more complete book. That's why the subtitle is appropriately named "Bigger and Better" because it is in my opinion and I hope everyone else agrees. I think it complements the first book very well. The first book was such a tremendous learning experience. I learned the art of cookbook writing as well as how to deal with a publisher through the entire production process. The marketing of the book was also an eye-opener, let me tell you. It's very hard work without a publicist.

JF: Note taken: Write a book, get a publicist (Do I know any of those?)

So, of all the treats, which one’s your favorite?

PJ: Well there are so many more great new recipes. The book is almost twice the size of first Bear Cookin'. As for favorites, that's very tough to answer because each recipe had to be a favorite to even be considered. Certain standouts come to mind like the Bacon Double Cheeseburger Loaf. Y-U-M. God, don't get me started. It's so good--and the Potato Chip Cookies are incredibly addictive. Seriously, I have to be careful to share those when I bake them. I'm always afraid when I make a batch that I'll keeping wanting more and I'll end up homeless and jobless walking the streets mumbling the recipe to myself asking strangers to make me a new batch to feed my habit. Honestly, I've thought about that. Sad, I know.

JF: I heard there was a Bear event a few years back, where the buffet could only feature food from Bear Cookin’. That’s got to be good for the ego.

PJ: I believe that was hosted by members of the Great Lakes Bears based in Chicago. It was a great time. They have always been supportive of the books and I appreciate that so much. I received some very kind letters from around the country after the release of Bear Cookin' that described dinner parties and potlucks which were created using recipes from the book. That is very flattering to hear as an author and food lover. I hope the same desire and interest is given by readers of the new book.

JF: One reviewer made a lighthearted joke about the first book, stating that all the seemingly unhealthy options made the cookbook a "lawsuit waiting to happen." What do you say to people who feel promoting comfort food doesn’t fit into the mainstream popularity of health food propaganda?

PJ: I loved that quote! I use it on my website (www.bearcookin.com). I've never met that particular reviewer but I've always imagined him to be rail thin and probably prefers the company of very thin men. You could tell from the rest of his review that he loathes Bears for whatever reason. It's funny to me. Over the years, many Bear friends have confessed to me that they seem to draw "twinks" or very thin, hairless men without trying; and they can't quite understand it because there is still a certain degree of prejudice against the Bear appearance within the gay community. Very ironic. Bears have received a very strange cache and I love it. Perhaps the diversity within the group has helped to curb the stereotype. Honestly, I think it's because many Bears just have a confidence about themselves that seems appealing. As for the argument regarding "comfort food" versus "health food", I say "eat and enjoy food--just in moderation." Besides, health food trends come and go. To me, food is love. Sharing and enjoying food that you love is a way of celebrating life. The comfort most people find in comfort food not only relates to the satisfying quality of the food but also the emotional satisfaction it brings.

JF: So, what’s on the plate now? Can we expect a third course?

PJ: That decision will be left to the publisher. I was delighted that they wanted a second book. The books make a great set. However, my writing career has always been varied. I like to try new things. I'm currently working on a short story collection as I continue to contribute regularly to magazines and e-zines

Meet PJ and get your own autographed copy of More Bear Cookin’ at the official launch party for it’s national release at CREW Bar and Grill, Saturday November 5, 2005 at 3pm. Bear treats will be available for guests. Book sales provided by Borders Book Store.

Buy the book at shop.chicagopride.com