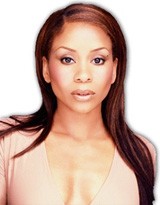 As Madonna’s concert tours over the years have gone through many creative phases and technological developments, there was always a welcomed consistency and familiarity with her long-time background singers: Niki Haris and Donna De Lory.

However, in light of the fact that she has a new baby at home and wants to spend more time with that bundle of joy as well as pursuing her own solo music career, Ms. Haris decided that she would not tour with Madonna this time around.

Though many will undoubtedly be disappointed not to see Niki Haris (yes, only one “K” and one “R” in her first and last names, respectively) on stage at the United Center this coming weekend, they’ll still be able to be entertained by this multi-faceted performer.

She makes an appearance at Sound-Bar on Sunday, July 11th to sing a few songs get a Chicago fix for her Midwestern blood.

We caught up with Niki on the phone recently for a ChicagoPride.com “Quick Chat.”

I’ll assume that you really ARE a Benton Harbor girl and not from snooty St. Joseph?

Niki Haris: I am definitely from Benton Harbor!

Actually my mother worked there for many years and just recently retired.

You know what they say about living in Benton Harbor:

You’ve been living out in California for more than 20 years, but what do you miss most about the Midwest.

I miss being around real people with real noses.

Plus, they eat meat in the Midwest.

Out here in California, until it was fashionable with the Atkins diet, folks would act like meat was bad for you.

I used my father’s stage name as the basis for my stage name and was originally known as Nikki Harris very early on in my career.

But then when I initially started working with Madonna the record label misspelled my name on my first paycheck: one “K” and one “R.”

My bank still cashed the check and from that point on I’ve been Niki Haris. Thus if you go to my web site, it’s at www.nikiharis.com.

You’ve got some serious family history with your dad as a renowned Grammy-nominated jazz pianist.

Plus early on you were working a lot with other jazz acts.

So how did you get involved in the world of pop music and with Madonna?

I never initially thought I’d be involved with any kind of music and was originally planning on being a history teacher.

But a broke student needs to make some money and so I was doing some background singing for a variety of acts such as Patrice Rushen, Anita Baker, Michael Sembello, Whitney Houston and The Righteous Brothers.

They were looking for singer-dancers for the “Who’s That Girl” tour and based upon a recommendation I was flown in for an audition.

When I got there, I told them I was on a tight schedule and had things to do and thus I needed to audition first amongst the 200 girls they had.

They pretty much sent everyone home after I was finished with my audition and that was the start of a very long relationship with Madonna.

You and Donna De Lory are probably the most famous background singers of all-time.

Now you’re trying to do the solo thing full-time – a la Luther Vandross (a former background singer for Patti LaBelle).

Any trepidation about this endeavor?

No, not at all as this really isn’t new for me.

While I’ve been doing background singing for Madonna, it’s not like I was just seeing “oohs and aahs” in the back corner of the stage.

I was actually a very integral part of the show doing lots of singing and of course dancing.

And this isn’t all that I’ve been doing – the Madonna stuff.

Over the years, both in Europe and here in the States, I’ve been involved with my own musical projects, sometimes even simultaneously with the Madonna tours.

I remember once in New York City I was on stage with Madonna at Madison Square Garden during the early part of the night, then I would head off to sit in on a jazz set at a club, and finally at 2 or 3 in the morning make an appearance at a dance club to sing a few songs for the boys.

ChicagoPride.com: You’ve done some acting in the past, including in one of my guilty pleasure favorites “Heat” with Pacino and DeNiro.

Any other acting roles coming up in the near future?.

Is acting something you’d like to pursue more seriously?

Niki Haris: To be honest I’m all about my music at the moment.

And of course my new baby girl at home.

If someone came to me with a project or acting role that they thought I’d be good for I’d take a look.

But no, I’m not really pursuing the acting thing.

ChicagoPride.com: I hear that you’ve got a couple of current dance music projects going with DJ Eddie X, including a remake of the classic “This Time Baby.”

How did this all come about?

Niki Haris: Eddie is an old friend of mine and he just recently moved back to Los Angeles from Miami.

He came over to my house to visit the baby and me and he said it’s about time we did something together.

My new dance single I did with him is called “Let Me Hear The Music” and it just came out and is getting lots of play in New York City.

ChicagoPride.com: What’s this I hear about you performing with Chaka Khan’s old group Rufus?

It’s really a lot of fun for me as the music is so funky.

We’ll see how it works out and maybe I’ll do some recordings with them down the road.

ChicagoPride.com: Anything else we should be looking out for from you?

Niki Haris: I’ve got quite a bit going on these days.

We’re hopeful of putting some more dance tracks together for a full-length CD. And I’ve got a jazz album out and a new live gospel CD that’s about to come out.

ChicagoPride.com: Wow, you’re all over the place in terms of musical styles.

Niki Haris: As far as pop music goes, it’s changed so much over the years and is now very youth-oriented.

I’m just not as drawn to it as I am to the other genres. With jazz, those are my roots.

I’ve learned so much about music from jazz and it propels my overall interest in music. I love dance music and gospel because they both are so celebratory.

I really like to produce optimistic music that is very positive and has such great energy.

Niki will make an appearance at Sound-Bar, Sunday, July 11, 2004 as the club hosts the “official” After Madonna Concert Party.