Back as Blue: Actress Julia Stiles talks about her web series 'Blue'

In terms of technically it’s really not that different. We use very professional crews and good production value and the cameras are pretty sophisticated, but creatively it’s different. 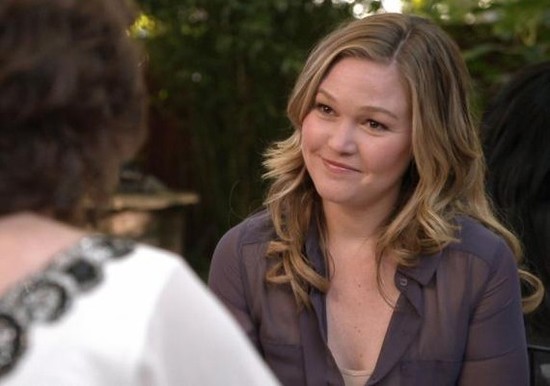 Actress Julia Stiles first came into the spotlight in the teen films 10 Things I Hate About You, Down to You, and Save the Last Dance. She then transitioned to varied projects including Mona Lisa Smile, The Omen, the Bourne Series, where she played Nicky Parsons, and Showtime's Dexter, which earned her an Emmy Award and Golden Globe nomination. Most recently, she had a supporting role in Silver Linings Playbook.

Now, Julia Stiles is starring in a series called Blue, which is in its second season on YouTube's WIGS channel. Jerry Nunn talked to the award-winning actress about her push to online dramas.

JN: (Jerry Nunn) Hi, Julia. What made you decide to do a web series in the first place?

JS: (Julia Stiles) You know what, it was as simple as wanting to work with Rodrigo Garcia, and I really love the way he wrote. He approached me about doing Blue I guess a little over more than a year ago. At first I was a little bit reluctant about the idea of a web series only because I didn't know what to expect, and I didn't know really how the programming on YouTube would develop, but I was intrigued also by the idea because I thought this is kind of the wave of the future and the way that people watch shows more and more, you know on their devices and on the computer.

But what really sold me was the first scene of the first episode in season one. It was just such a great premise and setup for a show, which is that this girl leading a double life, how to control it, and that the two worlds are going to collide. In season one she is with a client and as things get hot and heavy she realizes that he recognizes her from high school. I just thought that the idea that she's trying to keep something so secretive, a character that's living with a huge secret, to me that was worth exploring. Then I sort of looked at the idea of doing a web series differently, which is that I do get a lot of creative freedom that you sometimes don't get when there's a lot more money involved or when you are working with a movie studio or network.

JN: Is it hard to get in the mindset of Blue?

JS: I wouldn't say hard because I just do it because I know that's my job, but I feel like it definitely is difficult like day to day. When we were shooting I was in sort of a darker place, and that was the first time I had experienced that as an actress because the reality of some of the things that she experiences are pretty uncomfortable. As much as it's really intriguing to play a character that is covering up so many lies and kind of lying to herself it's not the most comfortable feeling every day. It's pretty disturbing from the things that she's experienced.

It's hard for me like now that I'm out of it and I've step out of the experience of shooting and being in that character I could easily psychoanalyze her but I didn't want to be judgmental while we were shooting. That's the most difficult thing. Like I wouldn't stop and say, "Well, why is she doing this?" because that would be sort of paralyzing.

JN: You also directed the series Paloma on YouTube. Can you talk a bit about that?

JS: Sure. It's four episodes and it's basically a rumination on love and how delicate love is. It's a year in a couples' relationship and how like the presence of a third person can destroy that relationship even if there's no infidelity or foul play. It's just like the idea of this girl being attracted to somebody else and a lot of suspicion and jealousy arises.

It's about a young woman who works in an art gallery, and she has a very flirtatious relationship with her boss that could help advance her career, and that ends up confusing her and also just destroying this loving relationship that she had with her boyfriend.

JN: What is the difference of working on a network television show as opposed to a web series?

JS: Well, I think that the way that viewers watch them is different but day to day I felt like I was on a set of a TV show. The turnaround is faster so whereas in movies and with television shows the amount of time it takes to get something developed and financed and the setup and shot and out in theatres or on TV is so long. I mean it can be years, and the exciting thing about what we're doing with WIGS is that we can accomplish so much more so quickly. I wrote Paloma in September and it's already finished, and we shot Blue in November and December and it's already being aired.

In terms of technically it's really not that different. We use very professional crews and good production value and the cameras are pretty sophisticated, but creatively it's different. It's just much more contained so really when we were making Blue it was really about my collaboration with Rodrigo and when I was making Paloma I would look to Jon Avnet, our producer and the creator of the channel, for guidance. He gave me so much freedom to just go with my vision, and that's really different from I think when you're working on a studio film. You have a lot of executives with opinions and usually valid opinions but because there's so much more money at stake I think they're a lot more people to answer to. We didn't really have that with Blue or Paloma.

JS: Yes, I had seen her in a play in New York called The Columnist with John Lithgow, and I was really struck by her presence. I was struck by the fact that she had to play a variety of different ages. She played even like a teenager, and I thought that she really pulled that off well and that's a difficult thing to do. Her physicality was really remarkable on stage, and I was just really impressed. I think also with theatre actors or actors who have a lot of experience in theatre have a whole other skill set, and so she just was delightful and kind of a beacon of light. I thought of her for the part and luckily she responded to the material, and we were able to work it out.

JN: Your character in Blue is a call girl with a son. How is that lifestyle?

JS: In some ways it is quite normal and in some ways quite extraordinary. Her work as a call girl is very extraordinary and not the norm, obviously, but her relationship with her son is. I think she's confronting his adolescence in a way that is probably pretty normal for most mothers and sons. He's starting to be interested in girls and she's got to deal with answering all those questions about sex, and she's also uncomfortable with it.

She's a young mother so it gets a little confusing between the two of them like what is the parent/child relationship, and sometimes they act like siblings, and who is actually parenting whom. Then another interesting thing that we approach in season two is that because he started acting out in school they both have to go to therapy. I think probably a lot of mothers don't like the idea of their son having to be in therapy because the first person the therapist is going to look to blame is the mother, but also a mother like Blue who has such a web of lies that she's tangled in the last place that she wants to be is in a therapist's office being asked questions about her past so it gets interesting.

JN: I heard Jennifer Beals is involved with the series. How was it working with her?

JS: Yeah she's great. We didn't actually work together but I did meet her while we were on the set. She's really, really lovely but she's in a different series on the WIGS channel called Lauren that should come out after Blue I think. Yeah I mean who doesn't like Jennifer Beals?

JN: Are there any characters that are gay?

JN: How do you watch shows like this with technology always changing, on your phone, your laptop?

JS: Well, I'm still trying to figure that out; meaning where and how to watch things. I actually cancelled my cable a few months ago because I thought there are so many channels and so many things out there that I just felt like there was a lot of white noise. I thought I can just watch everything on the Internet, but I still like the bigger screen so I don't know. I'm still trying to figure it out, and I still go to the movies. I like to sit in a dark theatre, and I enjoy the projection of film.

As technology gets better and better I do think if you can really focus your attention on your computer screen then—that's really the big challenge to me but luckily what we've been able to do with WIGS and Blue in particular is like you can watch one episode at a time or you can watch a bunch of episodes. If you watch them all the way through the story is actually about the length of a movie, but we've made sure that in telling the story that it holds for the hour and a half that is the first season.