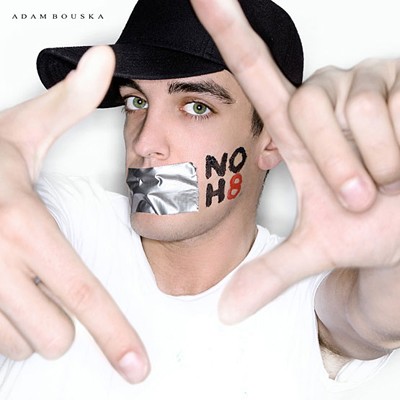 Adam Bouska and Jeff Parshley's now well-known NOH8 Campaign started simply, as an act of personal activism, when Bouska photographed Parshley with duct tape over his mouth and "NOH8" painted on his left cheek. Little less than two years later, over 5,500 people have participated in the campaign ranging from celebrities and political figures like Cindy McCain, Jane Lynch, Kathy Griffin and Isaiah Washington to their legions of followers who come to photo shoots they host in cities nationwide.

Monday, Oct. 11, Bouska and Parshley bring NOH8 to Chicago's W Chicago Hotel, 172 W. Adams St., from 4-7 p.m. in honor of National Coming Out Day. With the recent news of many homophobia-fueled suicides taking the lives of LGBT youth, the campaign could not becoming at a better time for our mourning community.

Just before their arrival in town, ChicagoPride.com spoke with NOH8 creators about their campaign's story - from its humble beginnings to its rapid expansion and future goals.

JE: (Joe Erbentraut) Hello! You two are bringing the NOH8 Campaign to Chicago with an open shoot on National Coming Out Day, Monday, October 11. What made you choose the Windy City for such a significant day?

AB: (Adam Bouska) Well, we've been trying to get back to the Midwest since we've been doing a lot on the East and West coasts with the campaign. But we try to take the campaign to every different city that we can. We haven't done anything in the Midwest before and I'm familiar with the area, since I'm from Chicago. We wanted to open up the opportunity to as many different people as we can.

JE: What was your experience of the Chicago LGBT scene like when you lived here? I understand you lived in the suburbs at one point and went to college in the city?

AB: I wasn't out at the time, so I was going through a period in my life where I was going through all of that and making friends, going out to Halsted and experiencing it all. Chicago is a very supportive and friendly city but I wasn't old enough to go to any of the gay bars yet. I lived in a very conservative area but there were still supportive communities there, too. That support needs to be more mainstream.

JE: I noticed you seem to have chosen a lot of cities for photo shoots based on what sorts of issues are affecting that community, even if they aren't necessarily LGBT issues. You did a shoot earlier this year in Arizona following the immigration law that passed there, as well as in Hawaii after civil unions were blocked.

AB: For every photo shoot we do, we try to tie in some sort of cause related to a social issue. In Hawaii, Governor Lingle had just vetoed civil unions and so we tried to register voters there as a response to that. In Hollywood, we recently held a photo shoot there to raise awareness about AIDS Project Los Angeles and also raised funds for our AIDS Walk team. We like showing how we can march not only for our cause but other causes as well.

JE: It seems this whole campaign began sort of accidentally for you both. Has your approach to it changed since it began?

AB: Initially, the NOH8 Campaign began with my taking Jeff's photo just after the passage of Prop 8. We were looking for a way to speak out and capture peoples' feelings at that time when they write discrimination into Californian's constitution as a way to split people apart. I think what made it successful is that it's so simple - with duct tape and the tattoo on the check - that it allows everyone to be a part of it.

JE: Has it been at all surreal to watch the campaign grow to the extent that it has?

AB: When we started, we didn't intend for it to become this organized at all, we just wanted to speak out through Jeff's image. We saw people in different countries making their own, including South Africa, Brazil and Australia. It was inspiring for us to keep going with the campaign. What started out in our apartment in California is being heard across the world and that sends a very clear message to us.

JE: Of all the photo shoots you've done to this date, do you have any that stand out as particularly memorable?

AB: For me, one of the most memorable ones we had was with Cindy McCain. We've been trying to bring out different faces to join the campaign and that was a prime example of that. She is a Republican and she was showing how essentially you can pose for a picture and it's not a Democratic or Republican political issue. It's a human rights issue. It doesn't matter what party you or your family members are, it's about standing up for what you believe in. Cindy made an important statement with that photo.

(Jeff Parshley): It's a little bit different for me. I grew up in a small town in southern New Hampshire and didn't really grow up around any gay people. At least, if they were there, they weren't out. But last November, we were able to go back to my hometown of Hudson, N.H., and we show No H8 Campaign photos in the cafeteria of my old high school. I was never out when I was there, so it was really nice to see my hometown come out and support me, including a lot of friends that I didn't really know were supportive of me who'd been following the campaign. To see them show up was really cool.

JE: Are there any other celebrities you're really hoping you'll be able to pull on board the campaign?

AB: We're always hoping to add new faces to the cause. We're hoping to get influential faces like Oprah, President Obama, Michelle Obama, Ellen DeGeneres, Al Sharpton, Jesse Jackson, Bill Clinton.. Any face that can essentially lend a face to the cause.

JE: You two mentioned in an interview with CNN that the campaign has also had an impact on your relationship. Could you tell me more about that?

AB: Initially, Jeff and I weren't looking to get married, but it was the option being taken off the table that made Prop 8 feel so personal. The experience of working together, understanding what is going on and gaining a passion for the cause has brought a different side to us and brought us closer together. Jeff proposed to me on December 13, the first anniversary of this campaign, and certainly added a new level to the fight for equality for us.

JE: How do your families feel about your work with the NOH8 Campaign?

AB: Our families are super supportive. My mom is always there at the photo shoots when she can be a part and it's brought us closer together, too. I think it's made my mom more vocal on the issue.

JP: My mom is definitely the biggest fan that I have, in the same respect as Adam's. She was never one to speak out vocally on behalf of the issue prior to the campaign, but I think the campaign has sparked a little something inside of her where she now realizes she has a voice and can use it. She tells all her friends about the campaign and educates them. I hope she's not the only person the campaign has sparked that for. We all have voices and really need to use them, or else not much will get done.

JE: Are you feeling optimistic that Prop 8 being repealed?

AB: I think we've seen great progress on the issue, particularly with Judge Walker's decision. There are still a lot of issues with the stay on marriages, but if the case does go to the Supreme Court, I think that will be great for the issue to get the attention it deserves. The issue needs to be discussed. But we remain optimistic and are going to keep pushing forward.

JE: What do you say to members of the LGBT community who might be reluctant to "be political?"

AB: For me, I hope one thing everyone gets from the campaign is that everyone has something they can do to contribute to a cause and it's a daily effort, not something that happens overnight. My partner Jeff and I speak out this way because this is what we can do. We were not activists before this, but Prop 8 opened our eyes to the issues.

You can still be fired in the majority of states for being gay, Don't Ask Don't Tell still exists - and over 400 people have been discharged under the Obama administration and Prop 8 is still part of the California constitution. The news of the LGBT youth suicides is an important time for our elected officials to stand up as role models and send a message to teens. These issues are still going on today, in 2010, and a lot of them aren't happening very far from home even when it's not covered in the media. We have to take full advantage of this opportunity.

JE: What is coming up next for you guys, after Chicago?

JP: We anticipate Chicago is going to be one of our largest shoots to date -- over 1400 people have RSVPed to the Facebook event page. After that, we're going to try and get around to the many places that need the campaign - Minnesota, Kentucky, Indiana, places you wouldn't ordinarily expect for our campaign to go. People there need the tools to speak out and the photos provide a great platform to create dialogue.

AB: We essentially are hoping to see the campaign go international. We'd love to see it head overseas. We feel the campaign is just starting for us. We're going to make the most of it and see how far we can take it.