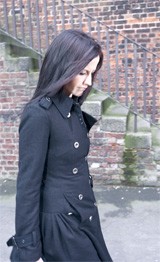 Who can ever forget Dolores O’Riordan’s glorious vocal gymnastics? As the leader of mega-successful alt-pop band the Cranberries, O’Riordan took listeners on countless musical joy rides, her crystalline instrument rising slowly from a whisper to a gorgeous and cathartic emotional cry. Still in awesome vocal form, O’Riordan has just released her first-ever solo album ARE YOU LISTENING? on Sanctuary Records.

Co-produced by Youth and Dan Broadbeck, the eagerly anticipated album is a 12-track tour de force and marks her first release in four years.

Written and recorded between her homes in Canada and Dublin, the album finds O’Riordan at her melodic best, each song a veritable hit in its own right. Punctuated with chords both muscular and agile, the songs alternate between hypnotic acoustic reveries and fiercely electric proclamations of love and strength.

Ultimately, the CD was a process inspired by personal experiences, both light and dark. “My mother-in-law died of cancer shortly after I left the Cranberries, which was devastating. It was like watching a beast attack from the inside out, so the song ‘Black Widow’ is a metaphor inspired by that. At the other end of the spectrum is ‘Apple Of My Eye,’ which was written about my husband, and ‘Ordinary Day’ reflects the birth of my third baby, Dakota.”

Here, on the eve of her first U.S. tour as a solo artist (see dates below), O’Riordan talks about the joys of being a mother, her love of Freddie Mercury, and the (very) distant possibility of a Cranberries reunion.

CP: This is your first release in four years. What’s the most important thing you learned emotionally during that time?
DO: (Dolores O’Riordan) I’ve learned that it’s very important to be yourself and very important to accept others for who they are?

CP: What have you learned artistically?

DO: I’ve learned that you should never feel any inhibitions when it comes to trying new things. It’s important to experiment, to take it that extra mile.

CP: What’s the difference for you between working as part of the Cranberries and being a solo artist?

DO: As a solo artist, the only one you are responsible to is yourself. I feel a freedom that I didn’t feel within a group. When you’re part of a band, you have to try to fit in. And when you’re up there on your own, it’s growing up time. There’s no relying on others.

CP: There’s a wistful quality to some of your new songs. Do you mind getting older?

DO: No, I really like it, particularly since I’ve had children. You know, gravity kicks in, and you’ve got broken veins on your leg. But when you’ve had kids, they are the fruits of your journey. Children help you grow old gracefully. For me, getting famous as a teenager, it was hard to trust people. When you have a child, it helps you to open up, to be more trusting, to believe in unconditional love.

CP: What are some of the things you lose when you get older?

DO: You become more careful, less daring. When you’re young, you jump into things. You don’t see danger. I don’t do that anymore.

CP: The song “Ordinary Day” definitely has a Zen quality, like you’ve accepted the way life is.

DO: That song is about a really difficult moment in my life. There was a lot darkness and death—funerals and things. The song is about feeling blessed to have a useful life, being able to bring new life back into the family. It all kind of gave me a sense of the journey of life. You really need to relax and enjoy it. It goes so quickly.

CP: You live in part-time in Canada, where gay marriage is legal. Do you have any thoughts on that?

DO: I don’t think there’s anything wrong with that. People should be able to be able to do whatever they want with their lives. A person’s sexual preference is their own business. I love the gay community. I mean, some of the greatest geniuses—people like Freddie Mercury, for example--have been gay.

It annoys me that anyone would be judgmental of someone because of their sexual preference.

CP: Did you ever get to meet Freddie Mercury?

DO: No, I never met him, but he was such an amazing performer, a very spiritual person.

CP: Are you and the rest of the Cranberries in touch with each other?

DO: God yes, were all friends. We call each other up to catch up.

CP: Do you think you might ever get back together?

DO: Maybe there’ll be a reunion in 15 years time. Right now, we’re all experimenting on our own, which is what we’re meant to be doing.

CP: Well, it was nice talking to you, Dolores.

DO: You too. Have an absolutely wonderful 2007. And good summer, love. Take care.

The Fillmore, at Irving Plaza