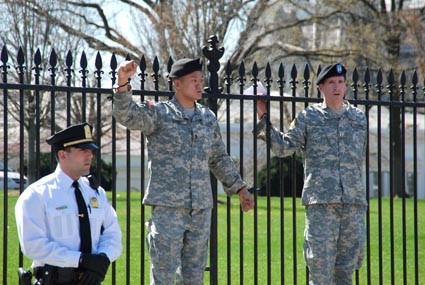 Choi, 29, outed himself last year on MSNBC's The Rachel Maddow Show. The Army responded with an official discharge, which Choi is fighting.

On Thursday, Choi and Capt. James E. Pietrangelo, who was discharged under "don't ask, don't tell" in 2004, were arrested by Park Police after the men handcuffed themselves to the White House fence. A third activist, Robin McGehee, was also hauled away.

All three activists broke away from an earlier protest hosted by the Human Rights Campaign (HRC), the nation's largest gay rights advocate, that featured comedian Kathy Griffin and HRC President Joe Solmonese, and led a crowd from Freedom Plaza to the White House chanting "Hey, hey, ho, ho don't ask, don't tell has got to go."

Choi, who said he wanted to deliver a message to President Obama, told the crowd "We will not disappear" before McGehee helped him handcuff himself to the fence.

Both men spent the night in jail and on Friday pleaded not guilty to the charge of failing to obey an officer. The court has scheduled an April 26 hearing.

In a Newsweek interview posted on the glossy's website Monday, Choi said he was prepared to dedicate himself to repeal of "don't ask, don't tell."

"Why now?" Choi began. "Because you get tired of talking. [Over the past two years] I've done 50 live interviews, a hundred other interviews, how much more talk am I expected to produce?"

"We all know the political reality now," he continued. "Obama told us at the HRC dinner last year, you need to put pressure on me. I was there at that dinner, in uniform. So this is my mission; the president said to pressure him and I heard that as a warning order."

"When I was handcuffed to the gate someone else asked me what's next. I'm standing there with hands lifted skyward and I just told him, 'This is.' I have fully committed my life and all the sacrifices necessary to manifest equality and America's promises."

Choi also questioned HRC's resolve on the issue, saying its leader betrayed him when he did not march with him to the White House.

"If [HRC] thinks that having a rally at Freedom Plaza with a comedienne is the right approach, I have to wonder," he said. "Don't ask, don't tell is not joking matter to me. To be at Freedom Plaza and not at the White House or Congress? Who are they trying to influence? I felt like they were just trying to speak to themselves. If that's the best the lobbying groups and HRC can do, then I don't know how these powerful groups are supposed to represent our community."

"Kathy Griffin and [HRC President] Joe Solmonese said they would march with me to the White House but didn't. I feel so betrayed by them," Choi added.