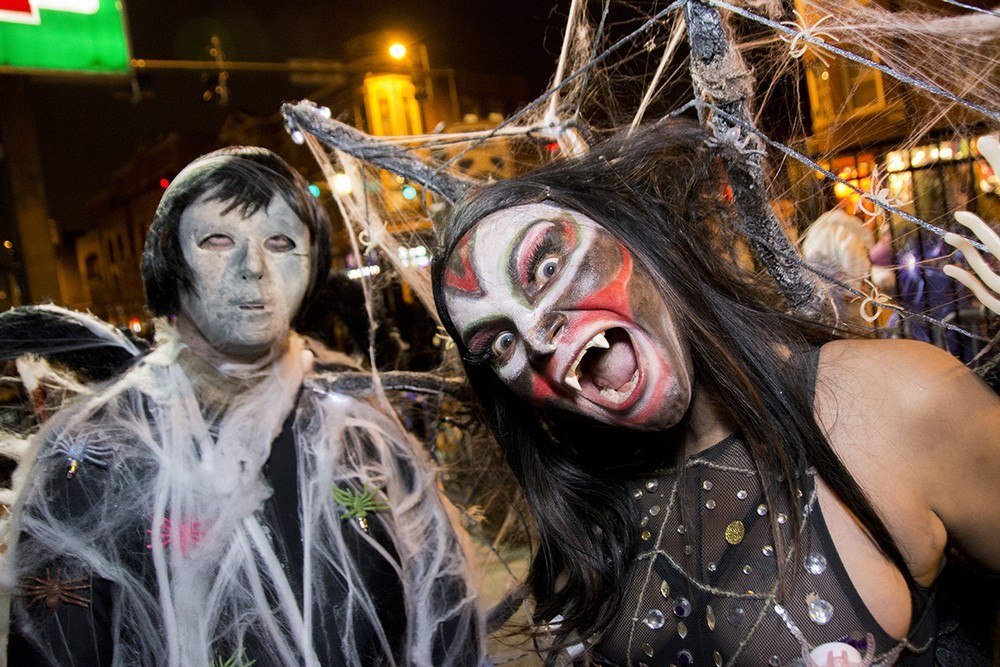 Chicago, IL - The 22nd annual Haunted Halsted Parade, held of course on Halloween night, is being monster-sized, this year.

Thousands will line the street, while hundreds compete for costume contest treats.

The parade kicks off from the corner of Halsted and Belmont, and travels north to Addison. The Haunted Halsted evening culminates with a new addition: Frock Fest. Northalsted Business Alliance partners with CircuitMOM Productions to host a post-parade party, featuring costume contest judging, music and more, at 3514 North Halsted.

"Bar none, Halsted hosts the best Halloween celebration in Chicago. Known not just in the city, but across the country, the parade is a sensational spectacle not to be missed," said NBA executive director Chad Honeycutt.

Matthew Harvat, aka CircuitMOM, added: "We are very proud to be a part of the Haunted Halsted Parade and co-producing the post-parade party and costume contest at the end of the route. It will be fun to bring back a destination for people to gather, see all the costumes again and find out who wins each category.

"I think getting the bars and businesses involved along the parade route by asking them to host watching parties and having each bar have a drag queen, drag king or host of some sort to provide commentary (as) the parade rolls by will help get people excited to come out in costume and watch the parade or even enter the various contests that night. People just want to see the spectacle and fun costumes.

"If Halsted pulls together and everyone has a party, contest or featured drink or something fun, it should be a packed night."

Registration takes place at the corner of Halsted and Belmont (in the CTA Turnaround) from 6-7:00 p.m.

The parade kicks off from Halsted and Belmont at 7:30 p.m. featuring the Chicago Thriller flash mob and travels north on Halsted to Addison. Frock Fest and the Afterlife Dance Party is scheduled from 8:30-10 p.m. at Halsted and Brompton.

Costume winners have a shot at $4,000 cash and a wide-array of prizes.

CircuitSON Edwin Martinez has coordinated with The Good Bus, thus a 42-foot long school bus will be present, transformed into a DJ booth with a 10,000 watt sound system and a performance space on the roof. The bus was recently featured at Burning Man.

"We will be using as our mobile DJ station to kick off the parade and then serve as our stage and live DJ booth for Frock Fest and the costume contest," Harvat said.

Costumes will be wide-ranging, as always, and regardless what Mother Nature delivers that night, there will be plenty of skin showing.

"The costumes keep getting better and better each year," Harvat said. "I cannot wait to see what everyone comes up with.

"We were trying to name our post-parade party something fun that was also all encompassing. It's Halloween, everyone gets a new frock to wear, right? So, that's how Frock Fest was born. Get yourself all frocked up and come play. People can register in advance for the costume contest at hauntedhalsted.com."

Harvat was the grand marshal in 2017.

"I was fortunate (last year) to see all the costumes in one area at the beginning of the parade route while we waited to take off. It was mind-blowing the detail people put into their costumes. I know this year will be equally exciting," he said.

The 2018 parade and contest features some of the most entertaining Chicagoans as judges – and who know what each might offer insightfully.

"Each of them is very talented and will bring something unique to the event for everyone to enjoy," Harvat said. "Lucy Stoole is a successful promoter, producer and performer with a very unique spin on everything gay who always brings the people together with every appearance. Tenderoni has such a classy, magnetic performance style; you cannot help but fall in love the very second he hits the stage. We have wanted to work with him for a long time. T-Rex, the artist formerly known at Trannika Rex, is Boystown's hostess with the mostess. That gal is hilarious, knows her way around a microphone and how to engage the masses. And, every party needs a boozy blonde that interjects at awkward times, pushes her way into the spotlight no matter how many times you tell her 'no, girl!' and makes people laugh at themselves, so, Dixie Lynn Cartwright was the obvious choice."

Harvat added, "Having been here for the very first Halloween parade 21 years ago, it's an honor to still be involved and this year we get to bring back our own layer of CircuitMOM sass with Frock Fest. We used to host the costume contest and a post-parade from 2000-2004, so hopefully it will become an annual part of the parade again."