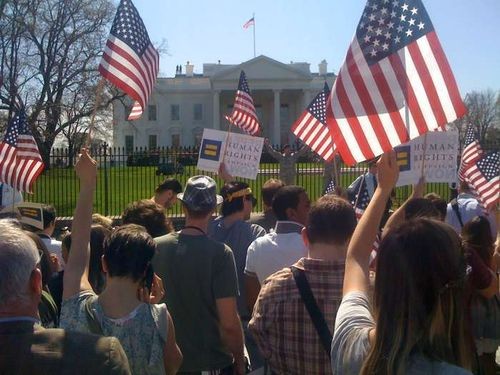 After speaking at a Human Rights Campaign (HRC) event in DC which featured Kathy Griffin, Choi reportedly along Capt. Jim Pietrangelo and a large crowd marched to the White House where Choi, Pietrangelo and activist Robin McGehee of GetEQUAL then handcuffed themselves to the fence.

According to OnTopMagazine.com, Choi announced: "Our fight is not here at Freedom Plaza, it is at the White House. We are walking to the White House right now to send the President a message. So, take out your cell phones and your cameras. Document this moment. Join us as together we make history."

Choi, a 29-year-old West Point graduate who announced he was gay on the Rachel Maddow Show, has not formally been discharged under the controversial DADT policy, though his discharge is pending. 44-year-old Pietrangelo, who is openly gay, has been formally discharged under DADT.

Choi was in Chicago last weekend for the Unite+Fight Midwest Conference at Columbia College. At that time, ChicagoPride.com contributor Joseph Erbentraut asked if he regrets the decision to become an activist. "You're always going to sacrifice something when you stand up against conventional norms and rules and you're going to make people uncomfortable," responded Choi.

"And regarding sacrifice, when you take a look at all the heroes that we regard as role models throughout history, going back to Harvey Milk or Dr. Martin Luther King, Jr., Rosa Parks, Jesus Christ, Moses, Socrates or Gandhi. Why do we remember them and not all of the others that were their contemporaries and did, if not the same amount, but even surpassed their organizing abilities or their know-how," asked Choi. "We do it because they sacrificed and put it all on the line."

Many gay rights activists blame President Obama for not moving faster to fulfill his promise to overturn the ban that allows gays and lesbians to serve only as long as they keep their sexual orientation a secret. The military continues its review on the impact of repeal, which is set to end by December 1.

"It was my honor (to) share the podium (with) Lt. Dan Choi today. I understand he's been arrested in front of the White House. I dig that dude!" Griffin tweeted from the HRC event.

Choi is scheduled to be the grand marshal of the New York City Gay Pride march on June 27.