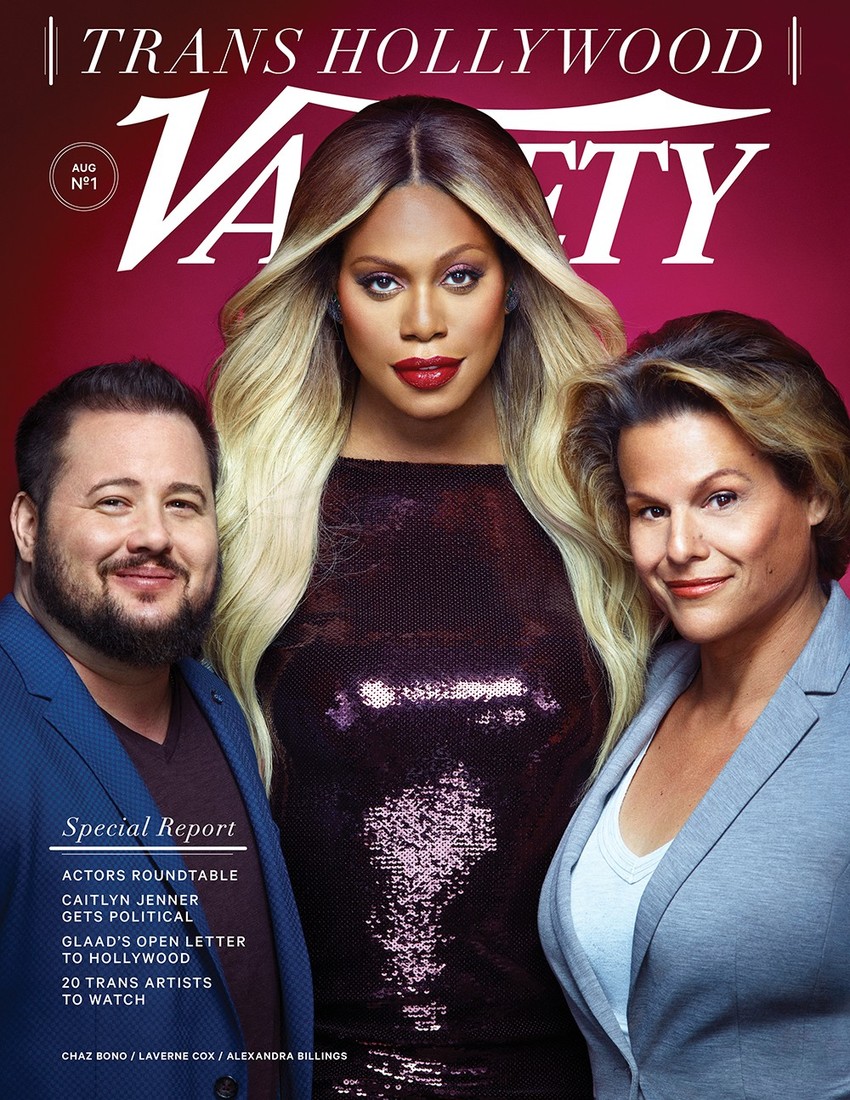 Cox is best known for playing transgender inmate Sophia Burset on Netflix's Orange is the New Black, while Billings portrays Davina on Amazon's Transparent. Bono, the son of Sonny Bono and Cher, transitioned in 2010. He shared his experience in the 2011 film Becoming Chaz. Bono appears in the upcoming superhero-themed television action series Adi Shankar's Gods and Secrets.

When asked whether cisgender actors should never play transgender roles and vice versa, Cox answered: "I think if all things were equal, then everyone should be able to play every character. But all things are not equal. As an artist, I don't ever want someone telling me that I shouldn't play something. But the reality is, 84% of Americans do not personally know someone who is transgender. So most Americans learn what they learn about trans people through the media. Right now in this country, in the first days of this year, 10 states introduced 21 pieces of legislation targeting trans people, mostly trying to limit our ability to go to the bathroom. The current president is trying to ban us from the military. Our unemployment rate is three times the national average. So in this cultural environment, when we see representations of cis people playing us over and over again, that reinforces the idea that trans women are not really women and trans men are not really men and nonbinary people don't exist. That is the basis of the discrimination that trans people experience."

"For the trans community, with our previous president so much progress really happened, and most of the progress has been rolled back [under the Trump administration]. So what scares me for kids is that there really are no protections in schools. In places like Mississippi, there are states with laws that are criminalizing trans folks. I'm worried there's no recourse now. I'm worried there's no protection," she added.

"It's never been about the bathroom," Richards said, referring to policies that prohibit transgender people from using the bathroom of their choice. "They don't want us to be here at all. And the reason I have hope is because we are still here."

On Caitlyn Jenner's standing in the transgender community, Richards said: "I was also a little resentful of the amount of attention that Caitlyn was getting at the time, when I felt there were so many of us who had already been working behind the scenes to increase the public understanding of trans issues. Ultimately, regardless of how I feel about her personally, the fact is after the show, every time I got in a Lyft, someone would recognize me. And then the conversation usually went something like, 'I'd never really thought about trans people before, but I watched it with my kids.' I think it's too easy, because of her politics, which I find reprehensible – we don't want to throw the baby out with the bathwater. That show put this conversation in places it wouldn't have otherwise occurred."

Editor's Note: Billings, 56, was inducted into the Chicago Gay and Lesbian Hall of Fame in 2007 and was the grand marshal for the Chicago Pride Parade in 2009.

Billings and her wife, Chrisanne Blankenship-Billings, were married in a commitment ceremony in Chicago on Dec. 4, 1995. They were legally married in 2009.