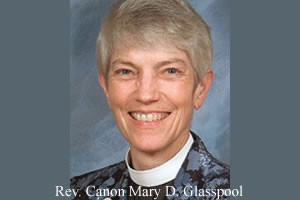 Los Angeles, CA - The Episcopal Church is poised to approve the consecration of its second openly gay bishop.

The Rev. Canon Mary D. Glasspool, an openly lesbian priest, was elected to become suffragan (assistant) bishop of the Episcopal Diocese of Los Angeles in December, just six months after the church did away with its self-imposed moratorium on the election of gay bishops. Church rules require that a majority of the church's representatives, which include bishops, clergy and lay persons, consent to her ascension.

Twenty-nine days after the process started, the Diocese reported that Glasspool has received more than half the necessary votes (29 out of 56).

Glasspool's ordination is scheduled to take place on May 5 at the Long Beach Area, provided a majority of the church agrees.

The ordination of a second openly gay bishop is certain to once again test the bond between the Anglican Communion and its more liberal American branch, the Episcopal Church.

Soon after Glasspool's election, Dr. Rowan Williams, the Archbishop of Canterbury and the church's spiritual leader, warned of a schism, saying her ascension "raises very serious questions not just for the Episcopal Church and its place in the Anglican Communion, but for the Communion as a whole."

Last week, Williams elaborated on a two-track proposal that would give some churches full membership in the Anglican Communion, while others, presumably more liberal ones, would remain on the outside. A schism in all but name.

"It may be that the covenant creates a situation in which there are different levels of relationship between those claiming the name of Anglican," Williams said in an address to the Church of England's governing body. "I don't at all want or relish this, but suspect that, without a major change of heart all round, it may be an unavoidable aspect of limiting the damage we are already doing to ourselves."

The issue of openly gay bishops in the Episcopal Church first arose in 2003 with the ordination of New Hampshire Bishop Gene Robinson. The selection led to the self-imposed moratorium on the election of gay bishops that was lifted last July.