Despite recent advances, nearly half of LGBT employees remain closeted at work 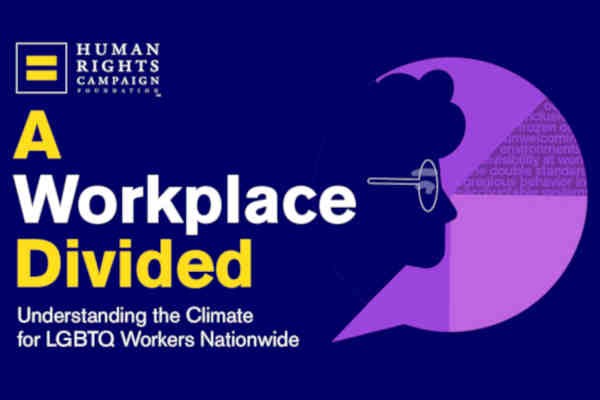 According to a report released Monday, nearly half of lesbian, gay, bisexual or transgender employees in the United States remain closeted at work.

The Human Rights Campaign's (HRC) A Workplace Divided: Understanding the Climate for LGBTQ Workers Nationwide is the organization's third survey of employees nationwide in the past decade.

Pollsters found that substantial barriers to full inclusion remain despite significant gains in LGBT equality, including nationwide marriage equality and corporate policies and practices that increasingly are LGBT inclusive.

"While LGBTQ-inclusive corporate policies are becoming the norm, LGBTQ workers too often face a climate of bias in their workplace," said Deena Fidas, director of HRC's Workplace Equality Program. "LGBTQ employees are still avoiding making personal and professional connections at work because they fear coming out – and that hurts not only that employee, but the company as a whole. Even the best-of-the-best private sector employers with top-rated policies and practices must do more to nurture a climate of inclusion for all."

Pollsters also found that fifty-nine percent of non-LGBT workers surveyed say it's unprofessional to talk about sexual orientation and gender identity at work. These same workers, however, report they regularly talk about their spouses, families and life outside of work with their co-workers.

"The double standard LGBTQ workers are held to remains a persistent barrier to full inclusion on the job," the organization said.