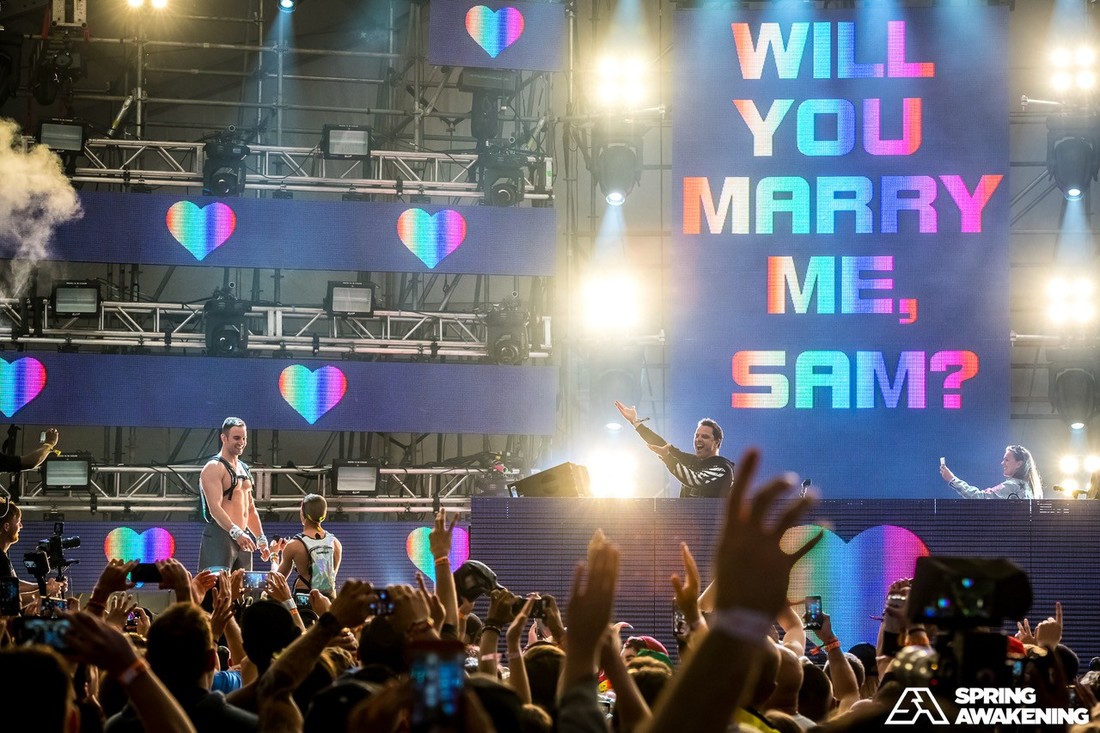 Gay men get engaged on stage in front of TranceFamily crowd of about 2,500

"Over the years I've gotten used to Dusty having special access to places that most people don't through his industry connections, so I didn't think too much of it when Dom Brown (of event organizer React Presents) came to bring us and my brother backstage during Markus Schulz' set. Dusty, my brother, and I are all huge EDM fans, and my brother and I are particularly big fans of trance and have known of Markus Schulz and his music for years.

"I figured we were just being given a behind-the-scenes view at the action as a special treat. As we walked towards the stairs to the stage, Dom said that he was friends with Markus and that he had said we could come up onstage with him. Going backstage was one thing; I certainly was not expecting to end up on the stage. We got up there and danced around a little bit and I remember thinking to myself, 'Wow, this is pretty amazing; this is what it's like from the DJ's perspective,' as I looked out at the crowd under the huge Trance Arena tent and peered over to watch Markus at the controls."

Schulz then grabbed the microphone and asked the crowd to welcome Albright and Carpenter to the stage, and the DJ gave both a hug.

"I thought, 'Wait a second ... How does Markus Schulz know our names?'" Albright said.

Schulz' song "Destiny" then started to play and Carpenter pointed to the huge LED screen as the lyrics drifted across.

Next up on the screen, the words in rainbow lettering: "Will you marry me, Sam?"

Albright turned back to Carpenter, and he was down on a knee.

"I was so overwhelmed that I just held out my hand without even thinking to say 'Yes,'" Albright admitted.

Schulz then said to the crowd of about 2,500 or more, "TranceFamily, show your love!"

The crowd erupted with cheers.

"After we left the stage, I couldn't form sentences for about half an hour; I couldn't believe what had just happened," Albright said. "Looking back, it was brilliantly thoughtful on Dusty's part. We both love going to EDM festivals with our friends and Dusty loves to make (a) big splash with his event planning."

No wedding date has been set, yet.

Albright was surprised, to put it mildly. "To say that that I was surprised would be a massive understatement," he said. "My brother and all of our friends knew what was going on, but no one accidentally let the cat out of the bag."

"We both have a love for the music, production, and culture of EDM festivals, so it felt like it would be a perfect place," Carpenter said. "With Spring Awakening (happening) during Pride Month and in our home city, it just felt right. I'm extremely lucky to have an amazing friend (who) works for React Presents. We started talking about this a couple of months ago, but everything really just fell into place the last two weeks."

Carpenter kept the ring in the bottom of his hydration backpack before the moment. And 20 minutes before going on stage he moved it into his shorts pocket, but never took his hand off of it.

"All the credit goes to React Presents, Dom Brown, Michele D'Amaro, and Markus Schulz," Carpenter said. "I spoke with Dom Brown several months before Spring Awakening and again Sunday night of Memorial Day weekend about what I wanted to do. He pitched the idea to the team at React Presents. They worked on finding the right DJ, stage, and time for it.

"The day before, I got a call from Dom and Michele who were excited to tell me Markus Schulz and his team confirmed they would do it. I was losing my mind at work with excitement. Sam is a huge Markus Schulz fan and the Trance Arena couldn't have been a more perfect place for him."

The actual proposal "was perfect in every way," Carpenter said. "The roar from the crowd is something I will never forget. My heart felt like it was jumping out of my chest. After putting the ring on his finger, which I was terrified I would drop or (it) wouldn't fit, I stood up and asked, 'Is that a yes?' He smiled, shook his head and said, 'Yes.'

"It was truly one of the best moments of my life. The music, the crowd, and the song made for a moment I can't describe fully with words."

Carpenter, 35, is the director of operations for DS Tequila Co., and DS Fajita Factory. He also is a board member of the North Halsted Business Alliance, and on Pride Fest and Market Days committees.

Carpenter grew up in a small town outside of Memphis, Tenn., and moved to Chicago eight years ago from Baton Rouge, La.

Albright, 32, does administrative work at a firm in the John Hancock Center. He is originally from the Charlottesville, Va. area, and this June marks his 10th year in Chicago.

Carpenter admitted he was nervous for a full week leading up to the moment. "All day Friday, all I could think about is how I wanted everything to go perfect and this be one of the best moments in Sam's life," he said. "Before, I would have just said, (the proposal is) the next step in a relationship and that I didn't think much would change. But that moment, our friends, the crowd, and the beautiful song created something Sam and I will cherish forever."

Carpenter and Albright met in September, 2010 at one of Sidetrack's weekly "Musical Mondays." They saw each other at the bar, kept exchanging glances, and eventually started talking.

Their first-date was the next day at ROOF, the rooftop lounge at theWit Hotel, known for its expressive design, sweeping skyline views, entertainment, and unique hand-crafted cocktails and cuisine. They then went to Sable Kitchen, per the recommendation of a bartender Carpenter knew at theWit.

"In some ways, I can't believe it's actually going to happen. We've been together since before getting married was even an option," for same-sex couples, Albright said. "The past few days have been a whirlwind, and it's still hard to wrap my head around the monumental life moment that I had this past Friday. I think we've both grown and changed so much over the years and will continue to do so in the future. Somehow our lives seem to keep getting more and more exciting."

Albright added: "I want to extend my most heartfelt thanks to Markus Schulz, Dom Brown, Michele D'Amaro, and everyone else at React Presents/Spring Awakening who made this moment possible for us, and to my brother, our friends, and the Spring Awakening TranceFamily for showing us so much love. Your kindness and support in creating that moment was a gift that we will carry with us and cherish for the rest of our lives."