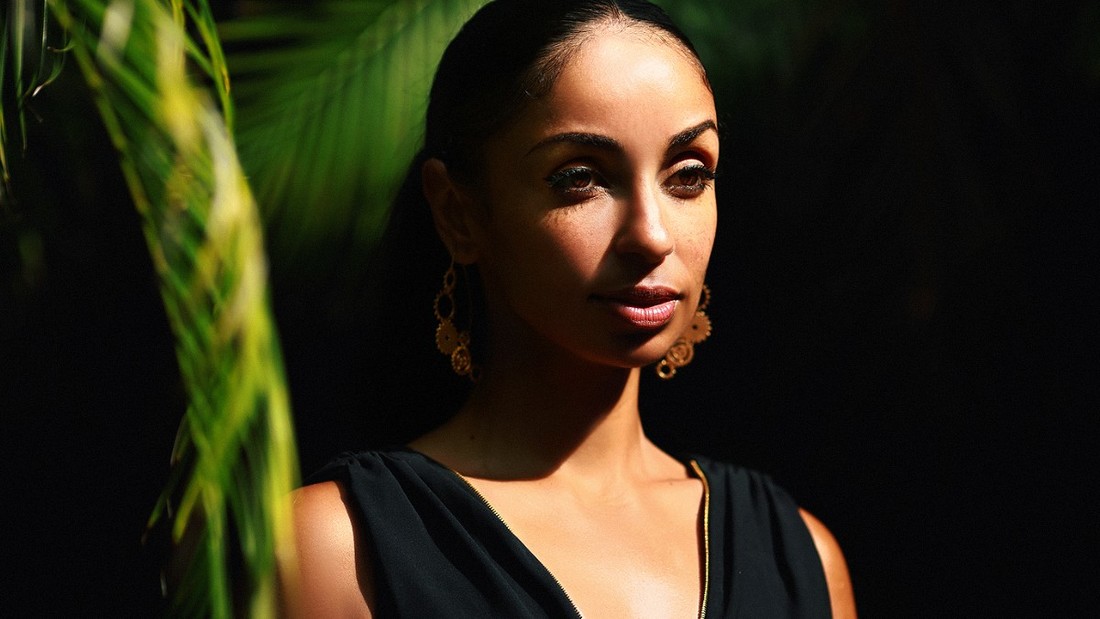 Her resume blasts award-winning accomplishments over the past 20 years: recording artist, songwriter and actress, most noted. There's also Dancing With The Stars, multiple endorsements and her own nonprofit organization, The Mýa Arts & Tech Foundation, dedicated to providing disadvantaged youth growth and opportunity through arts and technology education.

But her first love was, Broadway.

In fact, Mýa Marie Harrison – known to most as simply, Mýa – said, "I love Broadway," and she considering pursuing a musical theatre life in college, even in high school.

"That was the ultimate game-plan before any record deal came about," she said. "I was going to move to New York City and pursue theatre.

Who knows, she added, maybe she'll write and produce a show of her own.

Mýa saw Jelly's Last Jam at age 10, and "the musical Ghost had me flabbergasted and in a state of shock regarding the technological aspects of that show. Ghost is still my favorite, to this day," she said.

Mýa was intrigued and enthusiastic to hear about Showtunes at Sidetrack, which takes over the popular Boystown bar on Sundays, Mondays and Fridays.

And Mýa just happens to be coming to Chicago, soon. She is set to perform Sunday night, June 17 (on the North Stage) at Chicago Pride Fest, starting at 9 p.m.

"This is always my favorite time of the year – Pride Month – to perform, so I'm really looking forward to Chicago, which is such a beautiful city, particularly in the summer," Mýa said. "A few years ago, I discovered that Chicago has a beach. We don't associate Chicago with (its) beach too much.

"Chicago is a beautiful city and I always have a ball when I'm there."

Mýa said she's never been to a Chicago beach, but saw the slew of lakefront hangouts while driving on Lake Shore Drive.

She also knows about Chicago's deep history in house music.

"It's always a happy place to be," said Mýa, who has an uncle who lives in Chicago and has attended Taste of Chicago. "It's also one of the first places where I treated one of my vegan challenge winners (in 2017)."

Mýa said her Pride Fest performance will include her classics, all anchored around a simple message: "be true to who you are, empower each other, be there for each other, and live life to the fullest."

"I've gotten to do so much in Chicago (over the years)," she said. "I love the gay club scene, but that's one thing I haven't been able to do – to actually club-hop in Chicago. I know the (Chicago) music (scene) is very similar to where I'm from (in the) Washington D.C. and (the) Baltimore area."

So, will we see Mýa on Halsted Street?

Yes, she said without hesitation.

Mýa released her eponymous debut album 20 years ago, featuring "It's All About Me."

She won a Grammy Award for Best Pop Collaboration with Vocals for her rendition of the 1975 hit "Lady Marmalade," alongside with Pink, Christina Aguilera and Lil' Kim.

The past 20 years, she said, "have been a true blessing, an opportunity ...I'm thankful every day for going against the grain and just chasing what truly makes me happy, which is not traditional."

Especially since this is not the profession-of-choice her father wanted for her, she admitted. He was more set on her being a lawyer, doctor, scientist, or anything outside of the entertainment business.

Mýa made her acting debut in the 1999 thriller In Too Deep, starring LL Cool J and Omar Epps. She also has shined in The Broadway musical Chicago, alongside Catherine Zeta-Jones, Richard Gere, Queen Latifah, and Renée Zellweger. In addition, she had a supporting role in the Wes Craven horror film, Cursed, among other roles.

"Acting is a form of expression, as are all of the arts," she said. "I've been able to be a part of some incredible projects (over the years) and I'm very thankful for those opportunities as well."

In 2009, Mýa danced into our living rooms on Dancing With The Stars, with partner Dmitry Chaplin, ultimately finishing in second-place.

"Dancing With The Stars was a wonderful experience to be a part of. (Dancing) truly is a sport, though I don't think people look at it that way because it's so glamorous," she said. "I was really happy to participate, learning new styles of dance."

Mýa said she was not mad or upset with the results.

"Most people didn't want me on the show in the first place because they figured I was a trained dancer, which I'm not," she said. "I was just happy to make it that far because I figured I'd be voted off (immediately) because most people were angry that I was on the show.

"I actually preferred the results (as they were) "because of the pre-show backlash to her appearance."

Mýa does not watch Dancing now. Then again, she doesn't even have a television at home, as TV "is a distraction" to her work, she said.

On Hulk Hogan: "My brother and I used to watch wrestling growing up. I (admired) Hulk Hogan; he was Randy Savage. "We often pretended like we were those (wrestlers), wrestling in the backyard. I would win, of course," she said, laughing. "Those were the great days."

On Being Vegan: Turning to a vegan lifestyle started "through insane will-power challenges that I put herself through annually," she said. "One year, for instance, it was no alcohol or wine. Once I went vegan, I never stopped."

Did You Know: "People have never seen the behind-the-scenes Mýa: the choreographer, the lawyer, the manager, etc. Most people don't know all aspects about me. I am intense, passionate ...and a wild child, too."

Mýa performs the North Stage at 9 p.m. on Saturday, June 16. Chicago Pride Fest, which is organized by the Northalsted Business Alliance, runs June 16-17 on Halsted Street between Addison and Grace. A $10 donation is recommended. The Chicago Pride Parade is the following Sunday, June 24 at noon.