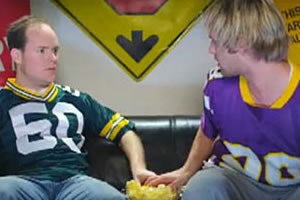 photo credit // on top magazine
CBS has rejected to air an ad for gay dating site ManCrunch.com during the Super Bowl, CNBC reported.

The exclusion drew a sharp protest from the companies executives, who immediately leveled a charge of discrimination against the network.

"We're calling on every same-sex advocacy group to petition CBS and let them know this … behavior will not be tolerated," the Toronto-based dating site said in a statement.

In the 30-second spot, two men, each rooting for the opposite team, share a passionate kiss after their hands brush each other in the potato chip bowl. The ad can be seen at ManCrunch.com's website and has racked up more than 15,000 views on YouTube, the video sharing website owned by Google.

CBS has reportedly told media outlets that it turned down the ad partly out of financial reasons.

But Elissa Buchter, a spokeswoman for the website, said CBS called the ad "not within the network's broadcast standards for Super Bowl Sunday" in its rejection letter.

Earlier in the week, CBS stirred up controversy when it agreed to air an advocacy ad featuring football star Tim Tebow by the Christian group Focus on the Family. While the ad is not anti-gay, the group does oppose gay rights.

Super Bowl XLIV, between the Indianapolis Colts and the New Orleans Saints, will take place in Miami on February 7.

View the ad CBS doesn't want you to see: