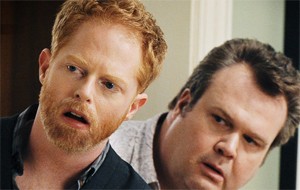 ABC has become a steadfast fixture at the awards show, which aims to recognize positive portrayals of the lives of gay, lesbian, bisexual and transgender people in the media. This year ABC earned eight nominations with Brothers & Sisters, Grey's Anatomy, Greek, Modern Family, All My Children and One Life to Live among its contenders.

This is the fourth year in a row for ABC to lead in television nominations.

"Words and images matter," Jarrett Barrios, president of GLAAD, said in a statement. "With these awards, we seek to recognize news coverage and entertainment programming that go beyond stock stereotypes with LGBT storylines that more fully reflect the challenges gay and transgender people face and the aspirations we hold for ourselves and our families."

A Single Man topped the list in the Outstanding Film in Wide Release category. The Weinstein Company film about a gay man's journey after the loss of his lover will compete against Miramax's Everybody's Fine, Dreamworks SKG's I Love You Man, Lionsgate Films' Precious and Focus Features' Taking Woodstock.

"Cynthia Nixon has been a vocal and visible advocate who has transformed cultural attitudes about our community," Barrios said. "She is a perfect example of how sharing your personal story and speaking out for marriage equality can inspire change among fair-minded Americans. It is our privilege to honor her."

The GLAAD Media Awards recognize excellence in 41 categories including newspaper content, syndicated columnist and comic books. Awards will be rolled out in a series of dinners: March 13 in New York, April 17 in Los Angeles and June 5 in San Francisco.

On the Net: GLAAD is at www.glaad.org