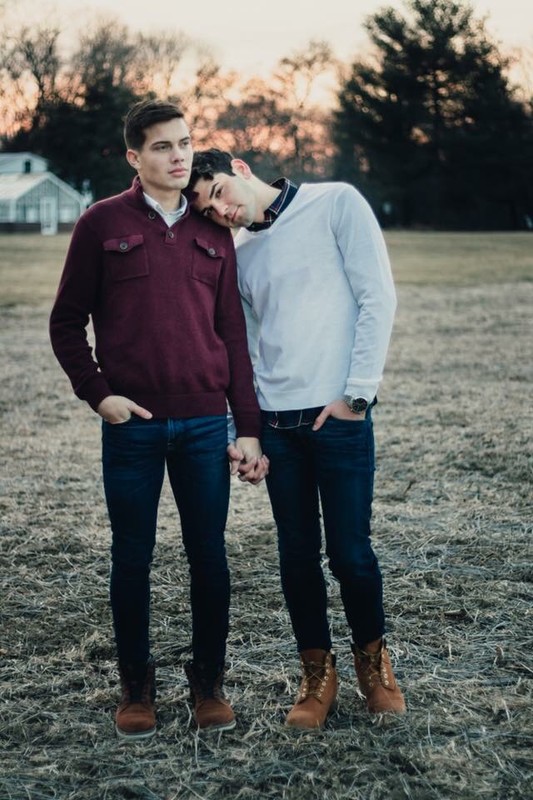 view the full gallery
Over the past few months, Javier Ruisanchez and Michael Dumaine have had two major moments in their high-profile sporting lives and their joint personal journeys as openly-gay high-level athletes.

Let's first jump back to Nov. 1, 2017, for a wet and chilly Wednesday afternoon soccer game at Panther Athletic Complex, home of Hanover College in Hanover, Ind.

Rose-Hulman University was visiting for a Heartland Collegiate Athletic Conference Tournament game, and for the second time in three seasons, the visitors claimed victory.

The game was the first time Ruisanchez had watched in-person as his boyfriend, Dumaine, played what was his final college game, ending a 40-game college career.

"It was an experience," Ruisanchez said with pride. "Seeing him take the field with his teammates was so exciting, but my favorite part was talking to all his family and friends in the stands and hearing how much of an impact Michael had on the Hanover Men's Soccer Team."

Dumaine, a defender, finished his career at the NCAA Division III school with 2 goals, 2 assists, including one game-winning goal.

"Talking to the Hanover students, I quickly realized how much of a leadership role Michael has at his school. So, the entire game I kept saying, 'That's my man!'" Ruisanchez said. "Hanover is a very small school, so when people heard and saw on social media that I was on campus they quickly came up and introduced themselves. His teammates were an absolute blast and were so excited to meet me. It made me feel safe and welcomed. It also made me realize how many people truly support our relationship."

Ruisanchez and Dumaine have been dating since last summer when they met in Washington, D.C.

"When I first met Michael, I would go to his summer games in Washington D.C. He was the team's star player. Everyone would talk about how fast and how good he was. (I am) not going to lie, it was pretty fun watching Michael score so many points back to back."

Dumaine attended Campbell County High School in Kentucky before moving on to Hanover. He played three years of varsity soccer in high school.

He played two seasons at Hanover after being injured during the summer before the 2015-16 season, and he graduated a year early.

Dumaine began playing club soccer at age 9 and stayed with the same club until 18. He was a two-time state champion with Kings Hammer Academy and a regional semifinalist. In 2016, he was a starter on the first men's soccer team to win the conference tournament at Hanover. Following the conference win, he played in the NCAA tournament first round in Wisconsin, and was named to the Heartland Collegiate Athletic Conference (HCAC) Honorable Mention Team. This past fall, after Hanover ended its season, Dumaine was named 2nd team HCAC and CoSIDA Academic All-District.

On Feb. 25, Dumaine The Athlete became Dumaine The Fan – watching and cheering Ruisanchez at a swim meet in Manati, Puerto Rico.

Ruisanchez competed in the 50-meter butterfly.

"I was really nervous that my presence was going to get in the way of Javi's preparation for his race," Dumaine said. "He has always told me that I'd never get to watch him race and that he hates when his family watches him race because he always swims poorly when they watch.

"I was so proud of him for being who he is and racing in the national team cap. It was truly an amazing experience, and I enjoyed the whole meet with him."

Dumaine met everyone at the meet, he said, including Ruisanchez' teammates, coaches, rivals, parents, national federation leaders and others. And all greeted Dumaine in Spanish.

"It was overwhelming because I was meeting so many people," he said.

"I (had previously) only watched Javi swim in practice, (thus) was so excited to finally get to watch him swim in a meet."

Ruisanchez and Dumaine are the epitome of today's gay athletes – out and proud. They continue to play and now are sporting fans too – for their boyfriend.

Dumaine, 20, a senior, came out last summer on Instagram. He simply posted a picture with friends who already knew, along with a caption about being gay. His Hanover teammates were always accepting, he said. "Some of them ask me about Javi all the time," he added.

Next up for Dumaine on the soccer front is, finding an adult league to play in after he moves to Washington, D.C., where he will be closer to Ruisanchez. He also is considering coaching, too.

"The response was so positive from everyone," Ruisanchez said. "I publicly came out to all the members of the Puerto Rican National Swimming Team, the Olympic committee and the Federation of Swimming in Puerto Rico through an article on Outsports.com in 2015. The response (in 2015) was overwhelmingly positive.

"It was then that I realized that no matter what my teammates would always have my back. The Federation and I became even closer and the coaches gained a new respect for me.

And even better when Michael is in the stands cheering.

"I have a love-hate relationship with Michael being at my meets," Ruisanchez admitted. "I truly love being able to look (in) the stands and see his face because it calms me down and helps me relax. However, it adds a little bit of pressure because I always want to swim my best when he is around. (Overall), it's always nice to have him there, because no matter what I know that he will be extremely proud of me."

Ruisanchez and Dumaine have been traveling to see each other, and have become quite close with each other's families.

"Michael is a part of my family and his family has adopted me already. I am so close with his family and it's a very special bond. I would say our relationship is very serious and extremely strong. He is my best friend and my soulmate," Ruisanchez said.

"Dating Michael has changed the perspective of the sport to me. Before I met Michael, all I knew was swimming; I had no life outside of swimming. All my focus was on my sport and wanting to make everyone proud. After meeting Michael, I quickly realized that it is OK to have bad days, a bad race or a bad practice, because I know that no matter what happens, Michael will be by my side to make things better. Michael gave me a life outside of swimming.

"He takes all the pressure and all my anxiety before races away. He can just give me a little smirk and I know that everything will be OK. (Plus), meeting Michael helped my swimming. Not only am I so extremely happy, but Michael has taught me how to be mentally strong even on bad days, (which was) something that I struggled with at the beginning of my career. Dating someone who is a high-level athlete is extremely rewarding. (He) understands what going to bed early is or what having to eat healthy on every meal means. Michael is always trying to make me a better athlete. Michael has made my life and my swimming career so much better."

Dumaine added, "Javi was there for me when my college soccer career ended. He helped me through it and helped me transition into the life of a retired athlete."

So how can, or will, Ruisanchez and Dumaine help other athletes, particularly those struggling with their sexual orientation?

"We really do understand what they are going through. We both went through the same thing," Dumaine said. "However, once you are able accept your sexual orientation, you realize that there are so many people around you who are going through the same thing and can help you. You also realize that everyone who loves you will keep loving you for who you are, and you find support from people who you may not have expected it from."

Ruisanchez added, "You just have to take it one day at a time. At the end of the day, it gets better."

Ruisanchez, 21, was a four-year varsity swimmer at West Springfield High School and is now a junior at George Mason University, living in Fairfax, Va. He has been swimming competitively for more than 12 years, earning his first spot on a Junior National and National Team in 2010.

Ruisanchez is ranked top 3 in Puerto Rico in the 400-freestyle, 800-freestyle, 1500-freestyle, and 200-butterfly. He is now swimming at Machine Aquatics in Northern Virginia.

Ruisanchez is a 20-time medalist at the Puerto Rico Swimming National Championships.

"We are both pretty competitive, so we have a lot of fun with that. We always hold each other accountable and encourage each other to do our best," Dumaine said.

Pizza Ingredients: Cheese – for both

TV Guilt Pleasure: Keeping up with the Kardashians

On Chicago: "We love Chicago! In fact, our first flight together was from Cincinnati to Chicago, so Chicago holds a special place in our hearts."

Favorite TV Show: Quantico – for both

Boxers or Briefs: Boxer-briefs – for both