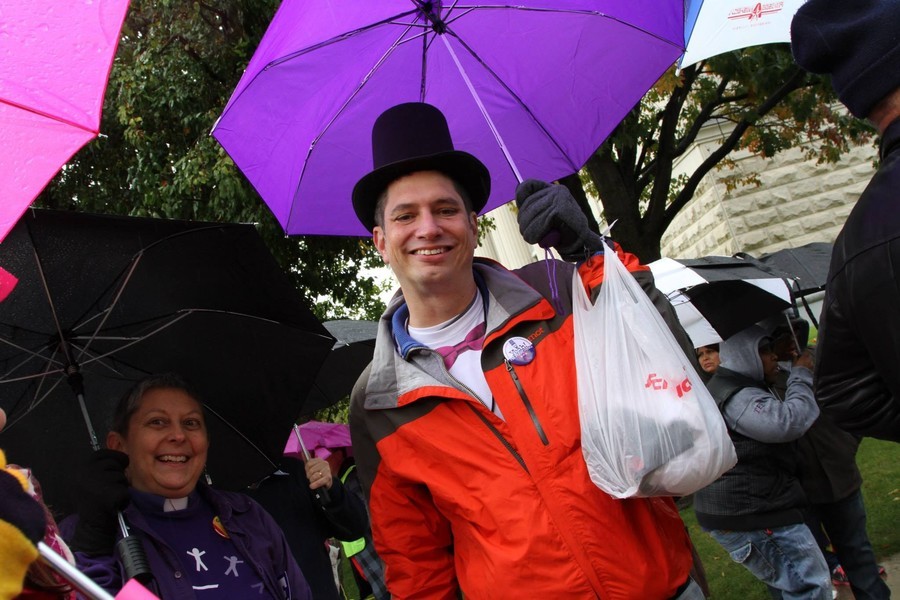 jim bennett at march on springfield, 2013

photo credit // stonewallagain.com
Chicago, IL - Jim Bennett, Chief Development Officer at Lambda Legal, will be departing the nation's oldest and largest nonprofit LGBT legal advocacy organization after a successful 11-year career—first as the Midwest Regional Director, then as leader of the fundraising team.

On Friday, January 5, his last day, staff, supporters and friends will gather to celebrate his tenure and see him off at Sidetrack Chicago.

"Jim dreams big," said Christopher Clark, current Midwest Regional Director of Lambda Legal. "His great aspirations for Lambda Legal and his faith in the capability of his colleagues to make those dreams reality has been a source of inspiration and motivation for everyone that has worked with him. He has been a mentor for colleagues across all departments and regions at Lambda and helped poise them for success. We will miss his brilliance as a strategist, advocate, community builder and fundraiser, but it is his energy, support and friendship that will prove to be an impossible void to fill."

In a new political landscape under the Trump administration, Jim immediately recognized the need to protect the legal and policy victories Lambda Legal fought so hard to secure while still pursuing an aggressive litigation agenda and set challenging fundraising goals for his team to meet the need.

Under his leadership and support, he and his development team met and surpassed their goals and successfully engaged more than 9,000 new contributors to Lambda Legal's mission following the November 2016 election.

As Midwest Regional Director, he led the fight in Indiana against the so-called "RFRA", helping to organize and lead a robust coalition of businesses, community groups, and citizens forcing then-Governor Mike Pence to repeal part of the law and bring national focus to discriminatory 'religious refusal' laws.

Jim was a lead strategist in Lambda Legal's Illinois and Iowa marriage campaigns creating and implementing broad, layered grassroots programs educating thousands and building sustained support for equal marriage rights in America's heartland. And in 2013, Jim chaired 'Illinois Unites for Marriage', the statewide coalition that led the successful effort to win the freedom to marry in Illinois.

"Love for his community and Lambda Legal have been hallmarks of Jim's work," added Clark. "He helped make progress for LGBTQ people possible in Chicago, the state of Illinois, the Midwest and the country. Jim Bennett is more than a fundraiser, he is a one-man movement and we were lucky that he chose Lambda Legal to be the official home of his vision and talent for eleven years."

Although Jim will no longer officially work at Lambda Legal, he will continue to volunteer and support Lambda Legal's work. Jim and his husband Terry Vanden Hoek will serve on the team of co-chairs for the 2018 Bon Foster celebration, Lambda Legal's largest fundraiser in the Midwest.

Clark added, "It is exciting that we will get to work together after his departure. I don't know a better ambassador and champion for Lambda Legal."