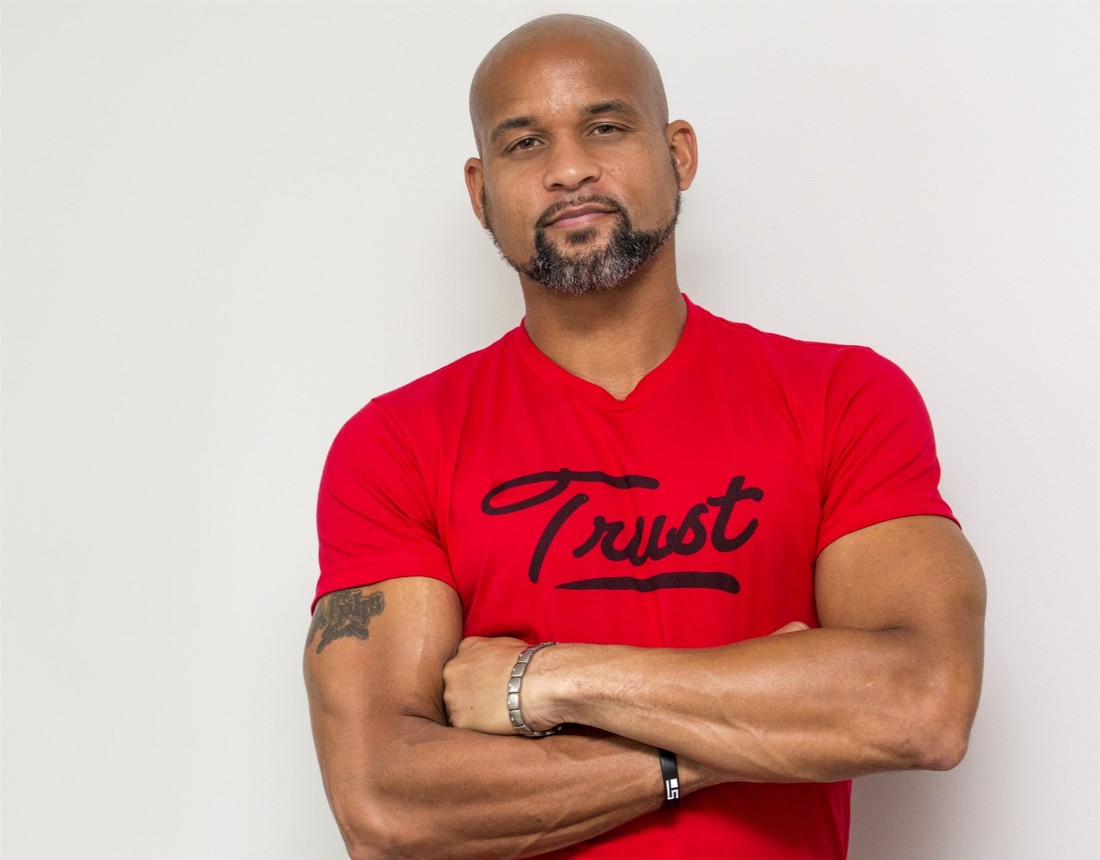 He might be best known as the host for such renowned home fitness programs as Insanity and Hip-Hop Abs, but that's just the start of this sculpted 40-year-old who played multiple sports growing up and excelled running track.

"Contrary to popular belief, I don't care what you look like; I care what you think like. I care about what kind of human you inspire to be every single day," Shaun T said in an exclusive interview. "It's very hard to step into a new space, if you have barriers, but if you believe in yourself ...and to believe in yourself, you have to accept yourself; and if you accept yourself, you can trust in your power to believe."

Shaun T has, for more than 10 years, motivated the world to power-jump their body. And he still is, but now also moving mental motivation, too.

"What I've realized over the past 20 years is, there are people who are extremely happy because they hit a number on a scale, but they're not happy on the inside ...If people actually tap into the things that have been holding them back, then they won't yo-yo diet, or they won't care about what they ate yesterday," he said.

"One reason people usually fall off track of their New Year's Resolutions is, they are constantly looking at the big picture, and yes, the big picture is really pretty. But if you look at something too pretty that you don't have, you can become a little unmotivated because it seems like it's so far away. So I focus on the small steps."

Take, for instance, the man who wants to lose 50 pounds. Every minute of every workout he is focused on the 50-pounds that he wants to lose – instead of realizing that, yes, his legs are, in fact, getting stronger as he works out regularly, or that he held the plank position longer than he ever had. "Small successful moments/steps really give you the power to get to the big picture without putting pressure on yourself," Shaun T said.

Shaun T will be in Chicago on Sunday, Jan. 7, for the first stop on his multi-city Shaun T Transforms America Tour – an immersive, one-of-a-kind experience in which he will teach his 7 Superpowers of Transformation.

"My events normally are these big, grandiose things with 500 to a couple thousand people working out (together), but I wanted to change the game this year, especially with my book now out, and really go into mental fitness, and really challenge people to take ownership in whatever they are trying to accomplish," Shaun T said. "Everyone's goals are completely different, so with the seven superpowers that I talk about in my book, you can use them for weight-loss, health and fitness, nutrition, getting a new job, getting out of a relationship, or coming out of The Closet. These superpowers help you believe in who you are.

"Instead of just listening to me talk, (event attendees) are going to go through an interactive experience – to get them mentally prepared."

Shaun T released his very revealing memoir, T Is for Transformation, in 2017. And the book unveils the seven transformational principles that guided his progress through life and that are at the core of his incredibly successful workouts, he said.

"I started writing it, but (then) realized that I had a block in my own life that arose, so I stopped (writing), went back to therapy to figure things out," he said. "I knew that I couldn't write a motivational book when the one thing that I'm trying to give people, I didn't even have the answer to."

Shaun T said he is "thrilled" with how the book turned out.

Shaun T said fatherhood has been, "amazing, hard, and sleepless ...but the best."

"You hate getting such little amounts of sleep, but you're so excited to wake up and look at your child. It's great," he said.

And changing diapers is not an issue.

"I have so many kids in my extended family and been around kids my whole life ...even the nurses (at the hospital) were surprised that I knew how to change diapers so well," he said. "The diaper thing is nothing to me."

Then again, there aren't many obstacles that Shaun T hasn't been able to overcome.

"I've always broken down the barrier between gay and straight, as well as in religion. Sure, I'm gay, but I don't let that be the (focal point) of a conversation," he said. "I get a lot of messages from gay people, often saying that they look up to me, or to me and Scott and our relationship ...since being gay is such a hard thing, including just coming-out, I try to tell people that (being gay) doesn't need to define you.

"I never speak to the gay community, per se, because I don't like to put somebody into a box," just based on sexual orientation.

Shaun T said he's not planning to venture out into Chicago's gay community – at least not for an alcohol-filled evening.

"I would go to a gay dinner spot (in Chicago), but I don't know if you're ready for me to be in a club," he said, laughing.

When Shaun T heard about the extreme low temperatures now griping in Chicago, he said, "That's crazy; you all can have that. I will be in my hotel, at the venue, and then back in my hotel. I'll hang out outside in Chicago ...only in the summertime."

Shaun T said he has a "very large fan base" in Chicago and been in Chicago several times in the past.

"I just love," the city of Chicago, he said.

"I'm a person of energy, and the people of Chicago are just, 'bout it; they get it; Chicagoans are open to try new things."

The first leg of the Shaun T Transforms America Tour comes to Chicago on Sunday, Jan. 7, from 11 a.m., to 3 p.m. at Venue One (221 N. Paulina Street). Tickets range from $99 to $349, and GoPride.com is proud to offer a 20 percent discount for all ticket buyers with code CHICAGO20. To purchase tickets, go to: https://gopride.com/Zdqu