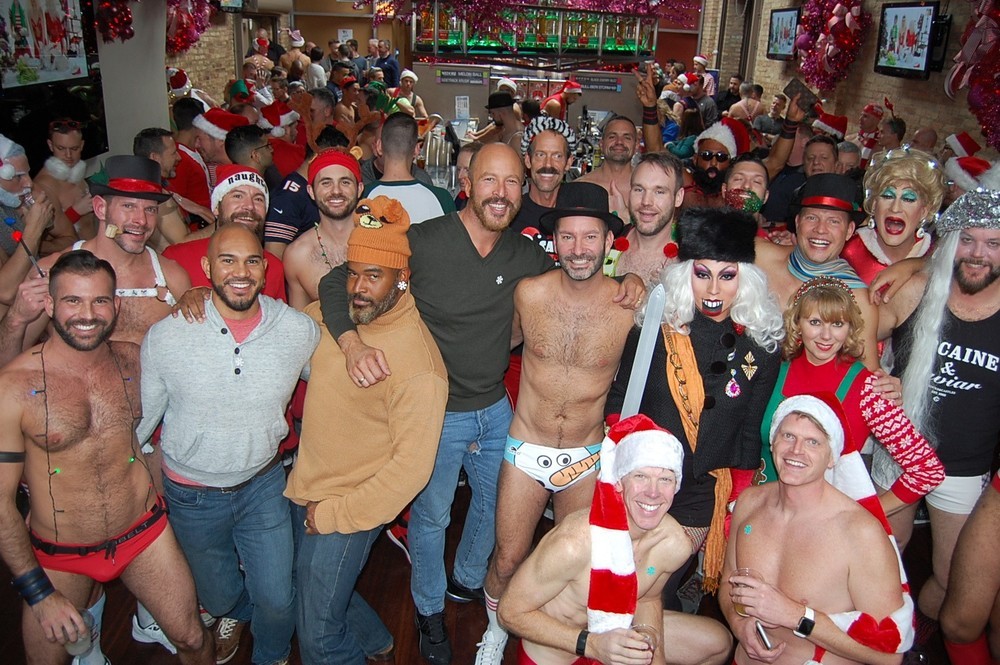 photo credit // anthony meade
Chicago, IL - This Saturday, Dec. 2, the streets of Boystown will once again be filled with more than 200 speedo-clad Santas dressed in holiday cheer running through the chilly streets of Chicago's gayborhood as the Most Fabulous Santa Speedo Run returns for a seventh year.

Karl Sponholtz and his partner Jeff Colgan adapted the event from similar runs held around the country (the Windy City branch raises money for the Chicago Diabetes Project) in an effort to create a fun winter event that would bring the Chicago LGBT community together to directly benefit local nonprofits.

The decision was instinctual, as Sponholtz told ChicagoPride.com in 2012, "gay men and speedos go together like Lady Gaga and an outrageous wig!"

The first event was held Dec. 2011 in Andersonville and, after only two weeks of planning, 50 runners (both male and female) and 150 supporters came out on a brisk 28 degree day to raise $3,000 for Vital Bridges.

After the tremendous success of their first year, which including packing sponsor bar Sofo Tap to capacity, the duo decided to move the festive event to Sidetrack in Boystown. Year two more than doubled participation to attract 150 runners and nearly 350 supporters, who gathered for a day of caroling, entertainment and door prizes.

Last year the event raised over $54,000 for the Center on Halsted.

As in years past, there will be a $25 minimum to run and every dollar goes directly to charity. This year's beneficiary is again Center on Halsted.

After sign-in and registration at Sidetrack, 3349 N Halsted, everyone will join together for a chorus of "Jingle Balls" -- Most Fabulous Santa Speedo Run's yearly anthem. The runners then head out to run one mile along Halsted, Belmont, Broadway and Addison, clad only their skimpy holiday attire.

Costumes in the past have ranged from simply speedos or bikinis, Santa hats and running shoes to garland-laced harnesses, red peek-a-boo union suits, reindeers in drag, strategically placed bows and more.

"I'm not sure if a speedo will be enough to keep me warm, it is winter, so I might wear a scarf and gloves," joked Juan Diaz, 29, who will be participating in the run for the first time and remains among the top fundraising runners.

"When I realized the run benefited the Center on Halsted, I decided to make this my first charity event," Diaz explained. "Over the years, specially in my early twenties, I benefited from the services offered by the Center, mainly their low cost or free HIV/STI screenings. They gave the services I needed for free, so now, I'm giving back. I no longer use their medical services but I know that others in my community still require the services provided by the Center."

More than 800 revelers are expected to cheer on the runners and to participate in other festivities that will help to raise money for the Center on Halsted. After the chilly jaunt through Boystown, all participants regroup back at Sidetrack for an afternoon of awards, entertainment and prizes.

Registration begins promptly at noon, with "Jingle Balls" slotted for 1:50 p.m. and the run itself starting at 2 p.m. The awards, entertainment and door prizes, which include two round-trip airline tickets worth $1,200, begins at 2:30 p.m.

Register to participate or donate to a runner online.