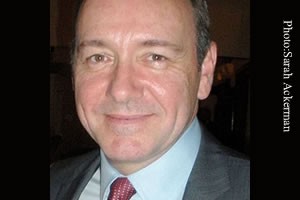 Oscar-winning actor Kevin Spacey has come out gay amid allegations he made sexual advances toward Star Trek: Discovery actor Anthony Rapp when he was 14.

Rapp, now 46, made the allegations in an interview with BuzzFeed News.

"Rapp is publicly alleging for the first time that in 1986, Spacey befriended Rapp while they both performed on Broadway shows, invited Rapp over to his apartment for a party, and, at the end of the night, picked Rapp up, placed him on his bed and climbed on top of him, making a sexual advance," BuzzFeed reported.

Spacey was 26, while Rapp was 14 at the time of the encounter.

"I still to this day can't wrap my head around so many aspects of it. It's just deeply confusing to me," he said.

Spacey, 58, responded to the allegations in a tweet, saying that he does not remember the encounter.

"I have a lot of respect and admiration for Anthony Rapp as an actor," Spacey wrote. "I'm beyond horrified to hear his story. I honestly do not remember the encounter, it would have been over 30 years ago. But if I did behave then as he describes, I owe him the sincerest apology for what would have been deeply inappropriate drunken behavior, and I am sorry for the feelings he describes having carried with him all these years."

Spacey went on to address rumors about his sexuality.

"As those closest to me know, in my life I have had relationships with both men and women. I have loved and had romantic encounters with men throughout my life, and I choose now to live as a gay man," Spacey sai