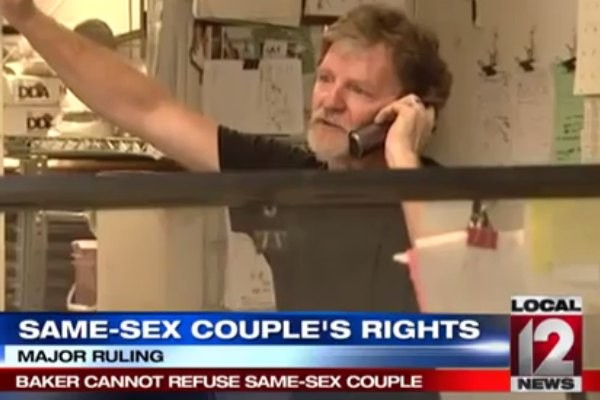 - The Trump administration on Wednesday asked the Supreme Court for permission to argue on behalf of a Colorado baker who refused to serve a gay couple.

The high court will hear arguments in Masterpiece Cakeshop vs. Colorado Civil Rights Commission on December 5.

In 2012, Jack Phillips, the owner of Denver-based Masterpiece Cakeshop, refused to consider baking a cake for Dave Mullins and Charlie Craig. The men married in Massachusetts and wanted to buy a cake from Phillips for a wedding reception they were holding in Denver (Colorado at the time recognized gay and lesbian couples with civil unions, not marriage.). Phillips said that serving the couple would violate his religious faith.

The couple sued, saying that Phillips' faith does not give him a right to discriminate, and a Colorado court found that Phillips had discriminated against the men under Colorado law. After the Colorado Supreme Court declined to hear an appeal, Phillips turned to the Supreme Court, arguing that the First Amendment protects his religious rights.

(Related: Baker who refused gay couple says Jesus would do the same.)

The government's solicitor general Noel Francisco filed a motion asking for time to argue the case alongside Alliance Defending Freedom (ADF) lawyers who are representing Phillips.

"As a general matter, the United States has a substantial interest in the preservation of federal constitutional rights of free expression," wrote Francisco, the third-highest ranking official in the Department of Justice.

"We are please to have the support of the Department of Justice. It doesn't come as any surprise that they would want to protect the First Amendment rights of the country's citizens," he said.

The American Civil Liberties Union (ACLU) said that the "stakes could not be higher."

"A ruling against [the couple] at the Supreme Court will not just encourage other businesses to engage in similarly discriminatory practices; it will enshrine a constitutional right to discriminate," said Louise Melling, deputy legal director at the ACLU.