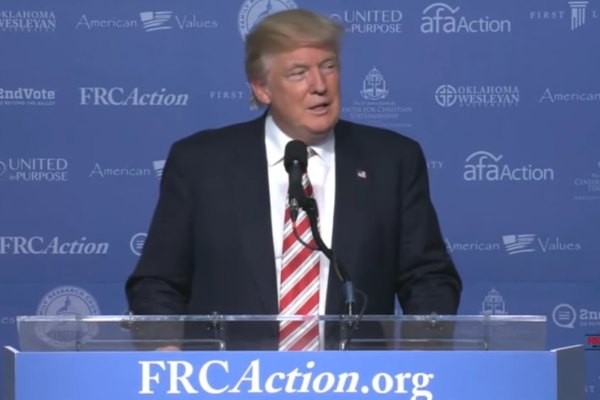 According to a Family Research Council (FRC) press release, Trump will speak at the event on Friday, October 13.

"Last year, he spoke to the Values Voter Summit as a candidate – this year, it will be as the 45th President of the United States," the group said. "Today we have confirmation from the White House that President Donald Trump will speak to the VVS crowd this Friday morning."

The annual three-day conference is organized by a coalition of Christian conservative groups. It aims to "preserve the bedrock values of traditional marriage, religious liberty, sanctity of life and limited government," according to the event's website.

At last year's event, Trump eulogized Supreme Court Justice Antonin Scalia and conservative activist Phyllis Schlafly, both of whom were vocal opponents of LGBT rights and promised attendees that as president he would repeal the Johnson Amendment, the 1954 change in the U.S. tax code introduced by then-Senator Lyndon B. Johnson that prohibits tax-exempt organizations, mostly churches, from endorsing or opposing candidates for elected office.

Trump also had positive comments for Tony Perkins, president of the Family Research Council (FRC), the organization behind the Values Voter Summit, and televangelist Franklin Graham, both of whom strongly oppose LGBT rights.

FRC in 2003 filed an amicus brief in defense of a Texas law used to criminalize sex between consenting adults of the same sex in the Supreme Court case Lawrence v. Texas. In 2004, the high court struck down such bans. While unenforceable, Texas' law remains on the books.

(Related: Franklin Graham prepared to have his head "chopped off" for opposing gay rights.)

Trump also pledged that as president he would fight for "American family values," a phrase used by some social conservatives to signal their opposition to LGBT rights.