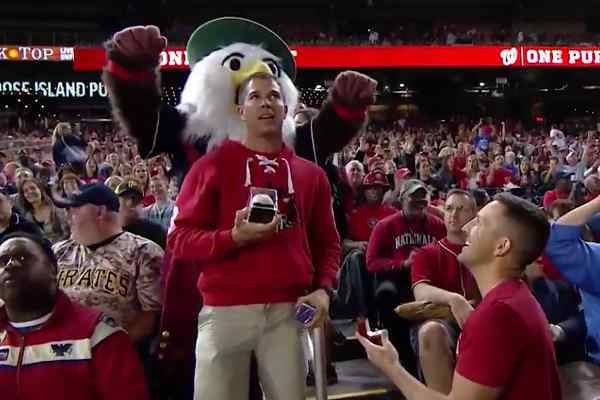 Washington, D.C. - The crowd at Friday's MLB game in Nationals Park cheered as a gay couple got engaged.

The proposal included the help of Screech, the mascot of the Nationals, and was broadcast on the stadium's jumbotron.

As the camera lingered over the couple, both of whom were dressed in Nationals colors, Screech handed a baseball which asked "Will you marry me?" to one of the men as the other got down on one knee and produced an engagement ring. The men hugged and kissed as the crowd cheered for the happy couple and Screech hugged them.

The Washington Nationals posted video from the engagement on YouTube. The team scored the video with Bruno Mars' single Marry You. While many fans in the video are seen taking pictures and clapping, a close look at the crowd around the couple shows several fans attempting to ignore the couple's engagement.