Governor Rauner meets with leaders of LGBTQ and allied organizations 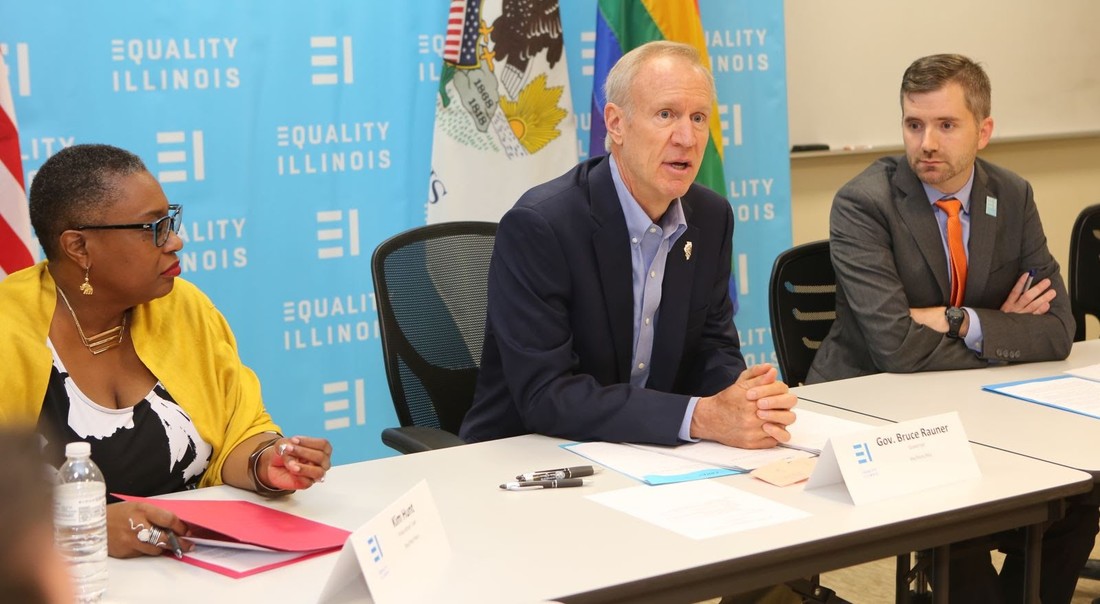 The issues discussed during the meeting at Equality Illinois, the state's LGBTQ civil rights organization, included healthcare and human services, youth and schools, housing, immigration, LGBTQ cultural competency of state-funded programs, and the protection and promotion of civil rights.

The governor also presented ceremonial copies of two bills he signed this summer that were part of the 2017 Equality Illinois legislative agenda–bills that modernize the birth certificate law for transgender Illinoisans needing to correct their gender marker and ban the anti-LGBTQ panic defense in murder cases. He also signed this year a bill to build LGBTQ representation on state boards and commissions.

"We thanked the governor for signing these significant measures that advance LGBTQ civil rights," said Brian C. Johnson, CEO of Equality Illinois. "It is also important that he heard from diverse voices in the state about the challenges LGBTQ Illinoisans still face in achieving full equality in Illinois and being able to live fulfilling and authentic lives."

During the approximately half-hour meeting, the participants presented an overview of key issues and provided the governor with an expansive agenda for consideration by him and his administration. (The organization(s) requesting inclusion of the particular policy item on this list is indicated in parentheses.)

Protection of the Affordable Care Act (ACA) and Medicaid, especially opposition against the Graham-Cassidy rewrite of health insurance (AIDS Foundation of Chicago)

In order to foster consistent affirming policies across the state, the Illinois School Board of Education should issue guidance to schools for affirming and supporting transgender students, including by allowing them to use facilities that match their gender identities, as required by the Illinois Human Rights Act. (ACLU of Illinois)

Regarding the fair and inclusive treatment of transgender students across Illinois, we want gender-affirming and clear guidance from the Illinois State Board of Education using existing district policies that have been working well for years and that is consistent with the Illinois Human Rights Act (Illinois Safe Schools Alliance)

Child welfare experts believe that LGBTQ youth are over-represented in child welfare systems and that one of the most significant barriers to providing this population with better care is a lack of research. For this reason, we have been advocating for a study on the prevalence and experiences of LGBTQ youth in DCFS care. The Governor's office can play an important role in identifying funding and intellectual resources to facilitate such a study. (ACLU of Illinois)

Immigrant Rights and the LGBTQ Community

Urge the governor to support greater protections for all immigrants, especially LGBTQ folks. For instance, the governor should support providing specific state resources to organizations providing both legal and advocacy services for LGBTQ immigrants seeking asylum and citizenship. An example of such an organization is the National Immigrant Justice Center, a Heartland Alliance program. Many of our LGBTQ immigrants face the threat of violence or death if returned to their countries of origins. (ALMA)

Enhance our civil rights protections by reducing the 15-or-more employee requirement to be a covered employer under the Illinois Human Rights Act (Dr. Anthony Kreis)