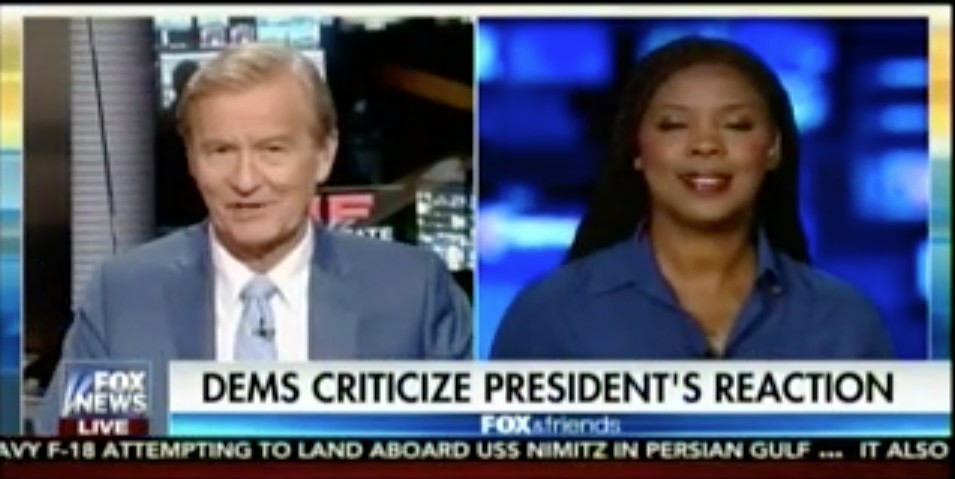 “These two flags represent the exact same thing. That certain people groups are not welcome here," she said

Are the "stars and bars" of the Confederacy the same as the rainbow LGBT flag? A guest on Fox News' morning show, "Fox & Friends," seems to think so.

Star Parker with the Center for Urban Renewal and Education appeared on the Tuesday morning episode. When asked to comment on House Minority Leader Nancy Pelosi's criticism of the president's hesitation to single out Nazis and the KKK for responsibility in the Charlottesville, Virginia attack, Parker responded:

"Nancy Pelosi is exploiting an opportunity that they think will play to their side," she claimed. "On Saturday, there were two sides that were in an American city that were -- then it was escalating very rapidly. No, the question became then, well, do you denounce the one part of it?"

She then added that it was "ironic" that people who might oppose the Confederate flag would support the LGBT flag.

"You know what's really interesting and really incredible irony here is the same people that are demanding that the Confederate flag comes down are the same people that are insisting that the rainbow flag goes up," she added. "These two flags represent the exact same thing. That certain people groups are not welcome here. So if Nancy Pelosi wants to say that we're going to start shutting down First Amendment rights of a certain group of people, then what happens the next time that the homosexuals want to walk through an American city and protest and counter protesters come out?"

32-year-old Heather Heyer was killed when a white nationalist drove a car into a crowd of people protesting the "Unite the Right" rally in Charlottesville over the weekend.

Parker's and Trump's messages in the wake of the attack stand in stark contrast to that of former President Barack Obama, who quoted Nelson Mandela, writing:

"No one is born hating another person because of the color of his skin, or his background, or his religion. People must learn to hate, and if they can learn to hate, they can be taught to love, for love comes more naturally to the human heart than its opposite."