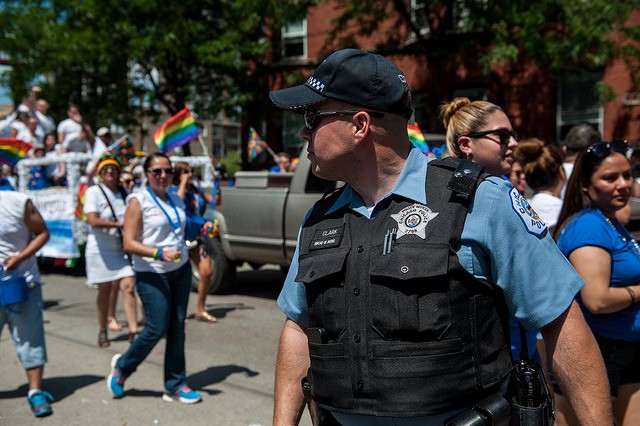 a police officer on duty at the 2014 chicago pride parade

Open container law will be enforced again in 2017

Chicago, IL - Whether you're a pride parade veteran or this is your first time attending, there's a few things you'll need to know before heading out to the 48th annual Chicago Pride Parade this Sunday.

Richard Pfeiffer, the coordinator for PRIDEChicago told ChicagoPride.com that there will be around a million people within the Uptown and Lakeview neighborhoods on Sunday. He cited the Office of Emergency Management and Communication for that figure.

Security will be tight this year, just like the parade last year following the mass shooting at Pulse Nightclub in Orlando.  Pfeiffer said that he was not given exact information about security for this year. "At a recent meeting with City officials, we were told that police presence would be equal to last year," he said.

Pfeiffer added that such stringent security was not unusual. "They have it at sporting events, festivals, all big events with a lot of people," he said. "Just with what's going on around the world."

Unlike protests at Capital Pride in D.C., Pfeiffer said that he was not aware of any large-scale protests threatening to shut down the parade in Chicago.

"People have a right to protest," he said. "But sometimes you're putting people in harms way." He added that he was confident security would be able to handle any such situation.

Open container rules will continue to be strictly enforced, with 160 private security workers patrolling the parade and police on every corner. Penalties include, but are not limited to, $1000+ tickets being issued, and you could have to throw out your booze.

Last month, Lea DeLaria, an Illinois Native who plays "Big Boo" on the hit Netflix series "Orange is the New Black" was named Grand Marshal for 2017.

CTA will be providing extra service and longer trains on the 'L', and several buses will be re-routed on parade day. Bicycles will not be permitted on CTA trains for most of the day, and strollers and carts must be folded before boarding all CTA buses and trains. Check the CTA's website for additional information.

Metra will also accommodate the large crowds from the parade by adding extra trains and seating. Metra partnered with Uber to offer another transportation option from Metra to the parade. By entering the promo code METRA2017, Uber is offering one free ride up to $15. Check Metra's website for additional information.

The Weather Channel currently calls for a chance of rain late on Sunday afternoon, but Pfeiffer said that attendees should ultimately prepare for the heat. As always, bring water, sunscreen, and a hat. The parade goes on, rain or shine.

For the most up-to-date information about the parade check out chicagopridecalendar.org