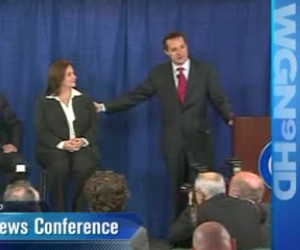 photo credit // wgntv.com
Chicago, IL - The Ricketts family made its first public appearance Friday since assuming control of the Cubs earlier this week.

The news conference was moved from the Cubs dugout to the Captain Morgan Club because of the rain.

As the event started, Tom Ricketts stood while his three siblings, Pete, Laura and Todd, sat in chairs on stage.

"We're here for the long term and we're here to win," Tom Ricketts said into the microphone.

The four are the children of the man who founded T.D. Ameritrade, an online brokerage firm. Each of them offering diverse views.

41-year-old Laura, the only daughter, is openly gay and lives in Chicago. With the Rickett's purchase of the Cubs, she becomes the first openly gay MLB owner.

Laura is a gay rights advocate and fights for gay marriage. She serves on the board of Lambda Legal, a national organization fighting for gay rights.

The oldest sibling is 45-year-old Peter who lives in Omaha. He ran for U.S. Senate as a conservative Republican. Peter opposes gay marriage.

"There's very much political as well as other diversity in our family. I think it is really, it makes us stronger. We don't agree on all the issues of the day but when it comes right down to it, we are family and love each other and that doesn't, that never changes. But it certainly makes for lively conversations. My parents have always encouraged us to be active and involved in the community and politically active, so, we got all the angles covered here. Todd always says that our political efforts and contributions and efforts cancel each other out," Laura told WLS-TV, "so we might as well not give at all."

43-year-old Tom built an investment banking firm and lives on the North Shore. He will serve as chairman of the board of the Cubs.

At 39-years-old, Todd is the youngest. He owns a bicycle shop and manages his investments.

During the press conference it was evident the family is unified in the ownership of the Cubs and is agreed on one thing. "We're gonna win the World Series," Tom told the press on Friday.

Watch Video of the Press Conference from WGN-TV: