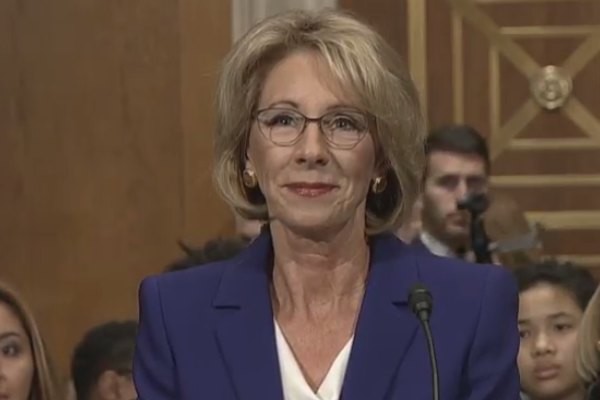 Secretary of Education Betsy DeVos on Tuesday responded to criticism that the Trump administration might allow federally funded charter schools to discriminate against LGBT students.

In recent weeks, DeVos has dodged the question during congressional hearings.

Testifying before a House Appropriations subcommittee, DeVos refused to say whether she would pull federal funding from a state that allows schools to discriminate against LGBT students.

During a Senate budget hearing last week, DeVos was asked directly whether she would prohibit private schools from receiving federal funds if they discriminate against LGBT students. "Let me be clear: Schools that receive federal funds must follow federal law. Period."

When Oregon Senator Jeff Merkley, a Democrat, reiterated the question, DeVos answered that her agency "is not going to be issuing decrees" on civil rights protections.

During her address to the National Charter Schools Conference in Washington, D.C., DeVos said that the U.S. Department of Education "is committed to ensuring that every child has a safe and nurturing environment," adding that she'll pursue discrimination "in any form."