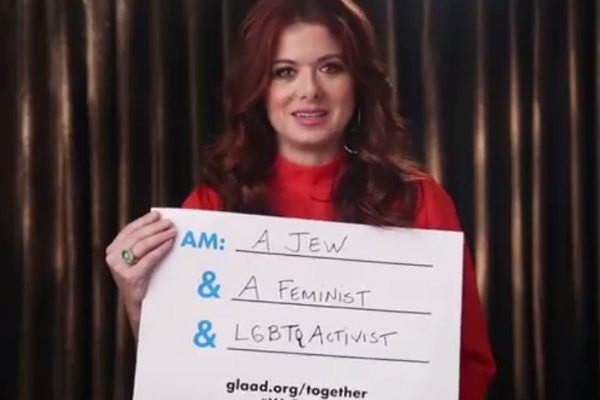 Actors Debra Messing and Sean Hayes have recorded a video in support of Sunday's Equality March for Unity and Pride and its sister marches.

In the nearly 1-minute video, Messing and Hayes, co-stars of the NBC comedy Will & Grace, call for marginalized communities and allies to join the Together movement and participate in Sunday's Pride Marches.

"This ampersand represents the power of our voices together," Hayes says in the video pointing to an ampersand on his chest. "I'm Sean Hayes and I'm a proud gay man and a husband and bald from the neck down."

Messing says that she's a Jew and a feminist and an LGBT activist.

"June is LGBTQ Pride month. You can show your pride by getting involved in one of the marches taking place nationwide on Sunday, June 11 and throughout the month," says Messing.

Hayes encourages viewers to visit GLAAD.org/together to find a nearby march.