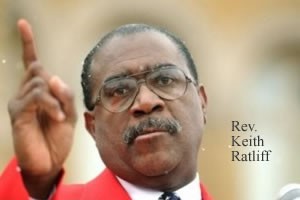 photo credit // on top magazine
The president of the Iowa-Nebraska chapter of the NAACP has endorsed anti-gay Republican gubernatorial hopeful Bob Vander Plaats.

"I know that Bob Vander Plaats is not afraid to stand up for what is right," Ratliff said. "That takes courage."

"He's talked about the importance of defending the institution of marriage. … That takes backbone and determination. That's what I want in my governor – and that's why I'm standing here today to show my support for him," he added.

Ratliff, a board member of the National Association for the Advancement of Colored People (NAACP), the nation's oldest civil rights organization, also said he will actively campaign for Vander Plaats.

All five of the men seeking the 2010 GOP gubernatorial nomination oppose gay marriage, but Vander Plaats is the only candidate who has pledged to issue an executive order to put a stay on gay marriage and force a vote on the issue.

An NAACP endorsement of a vehement anti-gay marriage candidate might appear counter to the group's national policy. Chairman Julian Bond and President Ben Jealous have come out publicly in favor of repealing Proposition 8, the voter-approved California referendum that banned gay marriage.

Bond, in fact, appeared in Washington over the weekend to support gay rights at the National Equality March. In 2005, Bond told a Virginia crowd that "applying for a marriage license" could "change the world."

In a spring story titled NAACP Offers Mixed Message On Gay Marriage, On Top Magazine reported that it appears a vote on gay marriage or the outlawing of gay marriage among national board members has never taken place. That is, Bond and Jealous have spoken against a ban on gay marriage as private citizens, not as representatives of the NAACP. A distinction made all the more apparent with Ratliff's endorsement.

In a Des Moines Register editorial, written by Ratliff and three clergy, the group said: "To anyone who reads and believes the Bible, there is no room for compromise on the issue of homosexuality. To those who look to 'natural law,' homosexuality will always be un-natural and un-healthy for a myriad of obvious reasons. … The Iowa Supreme Court has now issued its opinion, but it fundamentally changes nothing. Now it is up to the people and their elected officials to correct the court's error through the constitutional amendment process. The four religious leaders called for "Biblically justified civil resistance."

"There is a lot of homophobia in the NAACP," California Conference President Alice Huffman told The American Prospect. "There are a lot of Christians who feel threatened."

Jason W. Bartlett, deputy director of the National Black Justice Coalition, a group that lobbies for the civil rights of GLBT people of color, agreed.

An Iowa Supreme Court ruling legalized gay marriage in the spring. Since then Republican lawmakers have remained fixated on overturning the court's opinion. The issue of gay marriage is certain to dominate the 2010 gubernatorial race.