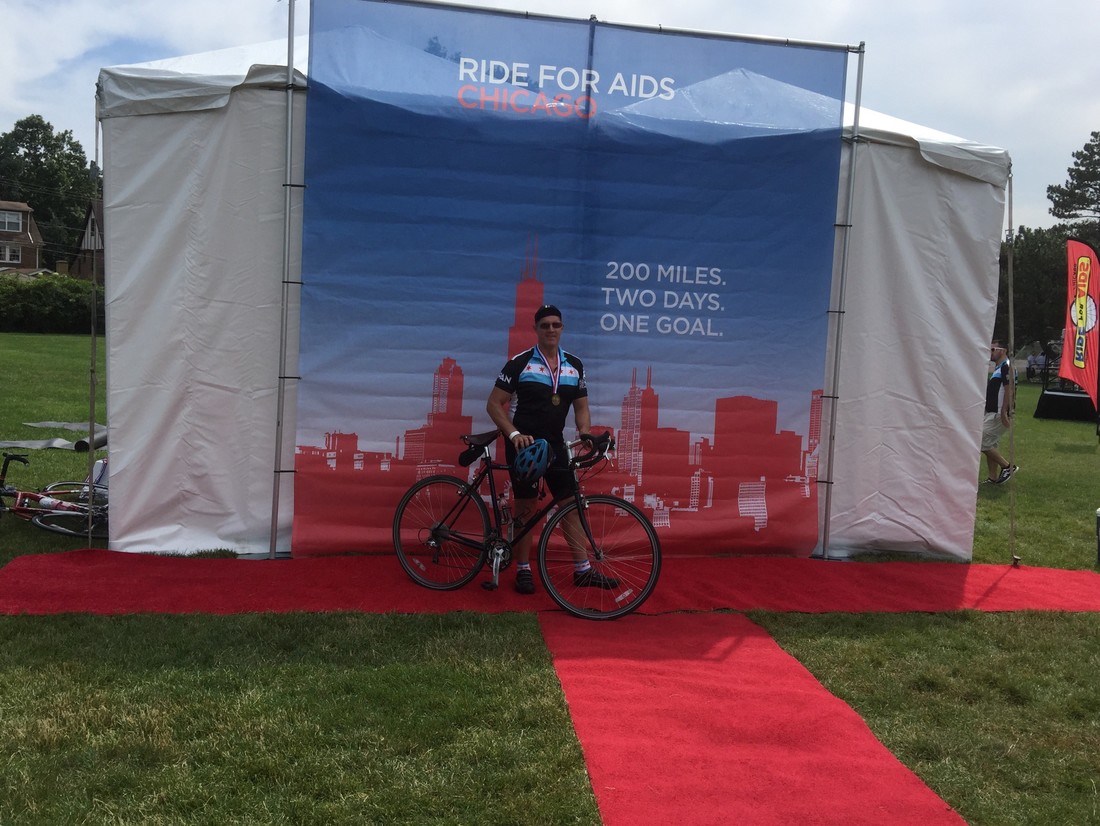 Randy Mitchell embraces the picturesque view of Chicago from a rooftop along North Halsted Street in the heart of Boystown. The city's skyline makes for memorable photos, with a Sunday Funday backdrop, as cocktails are plentiful and a hot tub is ready to truly enjoy the setting.

Mitchell also embraces that finish-line sign after riding his bicycle 200-miles in the annual Ride For AIDS Chicago, produced by the Test Positive Aware Network (TPAN). There will be plenty of photos then too, no doubt an abundance of chilled drinks and a true feeling of pride and accomplishment.

On Sunday, June 4, Mitchell will embrace both – the Ride For AIDS Chicago from a scenic rooftop, along with hundreds of others, as the second-annual View From The TOP is a major fundraiser for Mitchell and the Ride.

Mitchell, who lives in Chicago's Fulton Market neighborhood, is riding in his second Ride For AIDS Chicago on July 8-9. His 55-member Ride team features captains Mitchell, Mark Franklin and Richard Dickson. They are one of 10 teams represented in the Ride.

"Participating in the Ride (in 2016) helped me understand and appreciate more of our community. Not only the gay community, but the Chicago community overall," Mitchell said. "The service that TPAN provides to anyone that HIV has touched is remarkable. The history of the Ride, where it started and why, provided a deeper meaning to my overall Ride experience.

"The Ride is not only (a) sport, but it represents our community."

Mitchell, who has lived in Wisconsin, California, Germany and the UK, has called Chicago home for the past 16 years.

"For many years Mark Franklin tried in vain to recruit me to (participate in the) Ride," Mitchell admitted. "At dinner one night (in early-2016), the conversation came up once again. He said, 'It's time, Randy – you need to be part of this, to help build and strengthen its reputation. You have it in you.'"

The Ride, he said, is a way to make a difference to everyone touched by HIV and AIDS. And it's a challenge for him, too.

His favorite moment from the 2016 Ride was simple: crossing the finish-line.

Mitchell said the camaraderie, friendships and fellowships developed through the Ride are lifelong. "Having several of my close friends at the finish-line (in 2016) reminded me of what brotherhood really is. The other participants showed me what the meaning of 'community' truly is. We do not know one another, but for a few days we all did. We shared in an event that makes a difference."

Mitchell said the Ride is all about helping others, making a difference. And it's not just for the LGBT community. After all, the disease knows no boundaries and it certainly is not just a gay disease, as it was once believed to be.

"I have several close friends who are HIV-positive," Mitchell said. "I have always wanted find a way to help them, and the Ride gave me that opportunity. Not only did it let me advocate on their behalf, it educated me on more than just the individual basics we are taught on the street.

"The Ride gives me an opportunity to have a small voice on their behalf."

Mitchell said the Ride has, without question, had an impact on him personally.

"I needed to know, understand really, how this (disease) may affect future generations," he said.

Mitchell is pushing this year to finish among the top 20 percent of all riders, and also increase his fundraising for TPAN.

"This year's View From The TOP will be bigger, better and more fun than last year," Mitchell said.

The rooftop fiesta is hosted by SKIN PRODUCTIONS, which holds its monthly Octane Party at Fantasy Nightclub in Boystown with proceeds benefitting local charities. The next Octane Party is Saturday night, June 10, benefitting TPAN.

"The goal for the fundraiser is to reach more people and raise more money," Mitchell said.

About 500 are expected to attend.

Tickets ($25) can be purchased online or at the door.