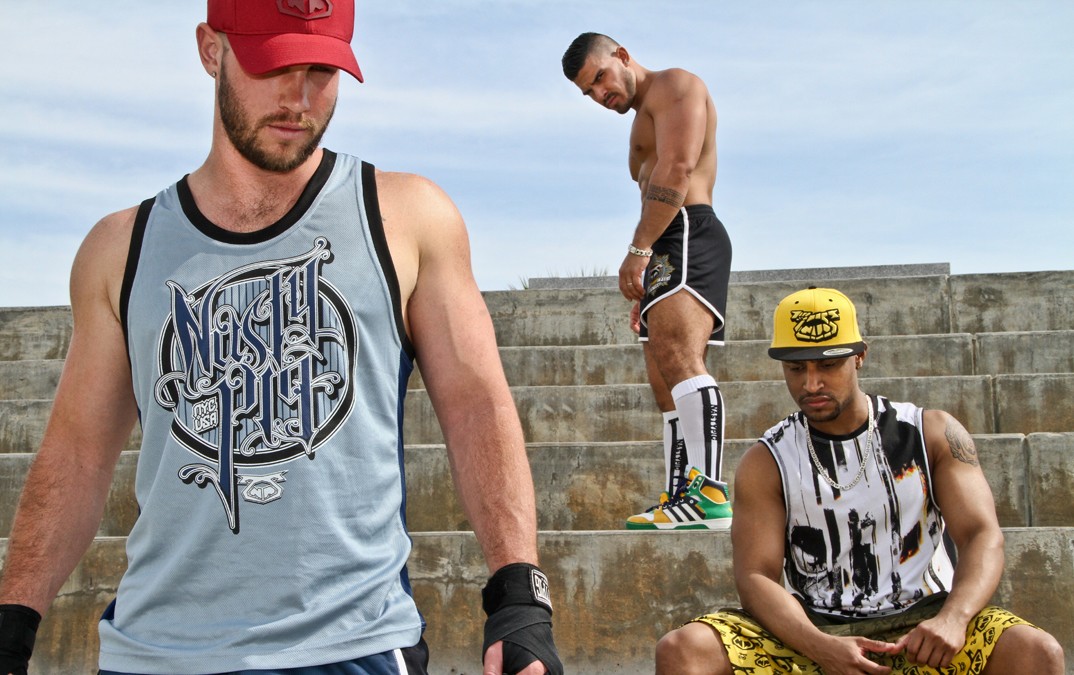 nasty pig has blossomed into a mega-popular brand

IML is 'home' to Nasty Pig founders and its customers

The original Nasty Pig was ...a dog, truly.

Nasty Pig has blossomed into a mega-popular brand, with a longtime clothing store in New York City, featuring fetish wear, underwear, jockstraps and so much more. Nasty Pig has become the ultimate edgy clothing brand for the masculine, sexually self-assured male consumers. Nasty Pig splashes bold stripes and loud colors. Quite simply, Nasty Pig is a trailblazing brand in its 23rd year that, as its founders boast, "gets you laid."

Frederick Kearney and David Lauterstein founded the company, and they are now husbands. The company is named after their Jack Russell Terrier dog, whose name was Piggy.

"She was the original nasty pig," Lauterstein said with a laugh during a phone interview in last-May. "We kind of named (the company) on a whim. It's not like I had taken any business classes. I was just trying to think of a name and her name was Piggy. I was raised on hip-hop culture in New York City, and in hip-hop you re-appropriated words. Meaning, you'd take words that are considered negative or defamatory, and you just re-appropriate them.

"So since her name was Piggy, and well, men are pigs. So we just re-appropriated the named."

Kearney and Lauterstein met in 1993 in New York City and their first product was "re:vision goggles," with refractive lenses, which they sold to club kids. They used the profits to buy fabric, which was used to make clothing for their friends.

Eventually they started making and selling clothes out of their apartment before they ultimately seized a 72 square-foot store. On Halloween 1994, Nasty Pig Incorporated is officially born.

Their first store was called "re:vision."

They developed the first gay culture brand, and Nasty Pig hasn't just survived over the years, it has thrived.

It's been "quite a journey," to put it mildly, Lauterstein said. "We started our business with nothing, not even a business plan. We just had a dream to make a cool company. So I think it's pretty humbling, pretty spectacular that we stuck to our guns and made something that we believe in.

"I never thought it wouldn't happen, but I never had any idea of what it-happening would look like. I was born with a lot of blind confidence, so doing this was just what I did; I never doubted myself. I just dove into the present and made it up as we went along."

Nasty Pig gained notoriety for its line of machine-washable Nasty Pig Rubber, highlighted by Nasty Pig Playsheets, and has seemingly gone wild from there. Nasty Pig quickly became the brand-of-choice for the young, fetish scene in New York – and spread worldwide from there.

Chicago, certainly, gets a big tip-of-the hat for the growth of Nasty Pig, thanks to IML, the annual Memorial Day weekend leather, fetish fest held in the Windy City.

Nasty Pig has over the years been a huge player at IML, specifically at the expo. The 2017 IML will be no exception as products from, and proponents of, Nasty Pig will be everywhere.

Just look for the NP or the ever-present Nasty Pig logo.

So what is IML to Nasty Pig?

"Home," Lauterstein said without hesitation. "We started Nasty Pig when AIDS was still taking so many people's lives, yet when we came to the leather community and IML, we saw this incredible group of sexually-active, life-positive, free-thinking gay men.

"Right then I knew, this is home, this is where I'm going to make my noise."

Nasty Pig grew nationally after first hitting on the East Coast. Their first retail partners were Mr. S in San Francisco and the Leatherman in New York City.

Nasty Pig ventured into NP Jean, the best-selling stretch denim style, and the company also is the first sportswear company in their industry to sell branded jockstraps – which were introduced years ago at IML.

Nasty Pig was and is a lifestyle to so many, and for many it is forever image. After all, in 2009, Lauterstein received the first photo of a customer who had had the Nasty Pig logo tattooed on himself. Many others have done the same ink.

Seeing that first Nasty Pig tattoo was "extremely humbling," said Lauterstein, who called the customer and cried on the phone. "It was pretty spectacular, truly insane, and hard to put into words.

"(Seeing the tattoos) makes me feel very responsible to always do the best job I can."

Nasty Pig has ventured into silk woven ties, with the logo intricately hidden within the weave of the material. Lauterstein said the company has received headless photos of customers wearing their Nasty Pig ties in both the Pentagon and the White House.

Nasty Pig also in recent years has been worn by James Franco, Madonna, Lady Gaga and many other celebrities.

But, Lauterstein has never been focused on celebrity-involvement. "I'm much more concerned with getting my clothing to my incredible customers than making sure it ends up on some celebrity. My customers are the real stars," he said.

After all, Lauterstein said that one of the earliest most poignant moments was the first time he spotted a Nasty Pig-wearing customer who he didn't know, wasn't a friend of his.

"That first time, when I spotted someone on the street who I didn't know wearing something we had made, that was, believe it or not, a lot more spectacular than watching Madonna wearing our stuff. That was pretty amazing," he said. "I ran up to him (in New York City) and hugged him, thanked him.

"To this day, it never gets old seeing people wear our stuff. It always feels incredible, always. And that's why I just want to keep making great clothing; that's all I really think about."

After all, Nasty Pig is now a company with 12 employees, a store that is about 800 square-feet, with a 401K program for its employees, "and we just keep growing and doing what we've done since day one," Lauterstein said.