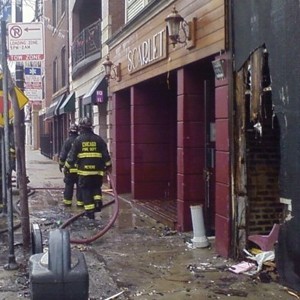 photo credit // barry freiman
Chicago, IL - When a five-alarm blaze ripped through the apartments above Scarlet, 3320 N. Halsted, on Feb. 26, the Boystown bar suffered severe water damage and the building was declared a total loss. Scarlet owner Paul Canella was unsure if the popular bar would ever reopen.

Now 7 months later and after a complete rehab, a determined Canella tells ChicagoPride.com that Scarlet is set to reopen Wednesday.

Cannella had originally hoped to reopen in June but was faced with a number of delays when rebuilding the destroyed building.

When Scarlet opens tomorrow, expect a new-looking bar starting with the main entrance—which is now on the right side.

Scarlet will now be four feet larger in the front, extending all the way to the sidewalk. There also is a featured seating area in the front, dubbed Table One. This area will double as a stage at times.

In addition, there will be a large glass window to the outside. There will also be a den-like area in the middle of the bar, featuring classic furniture.

All of the mechanicals were moved into the basement, so another four or five feet were added in the back. And the rear bar was moved to the other side, the left side.

The main bar is larger and more functional. The DJ booth also is now larger, as are both bathrooms.

And capacity has increased by 30 percent to almost 1,000 square feet.

There also will be a new antique disco ball near the front and a 10-foot photo of a drag queen from the 1920s.

"We tried to take the best designs from the old bar, correct some areas, and make this a new and improved Scarlet … with the same carefree, no-attitude-allowed bar," Cannella said.

There also will be free wi-fi in Scarlet, with coffee available during the afternoons, ideal for business meetings or study groups.

"People throughout the neighborhood and community really rose to the challenge, to immediately help those affected by the fire. There were fund-raisers at other bars, clothing donations, and so much more," Cannella said. "Bitter? Not one bit. I try to be positive in anything and everything I do in life.

Ross Forman contributed to this report.
Related Article: Scarlet rises from the ashes