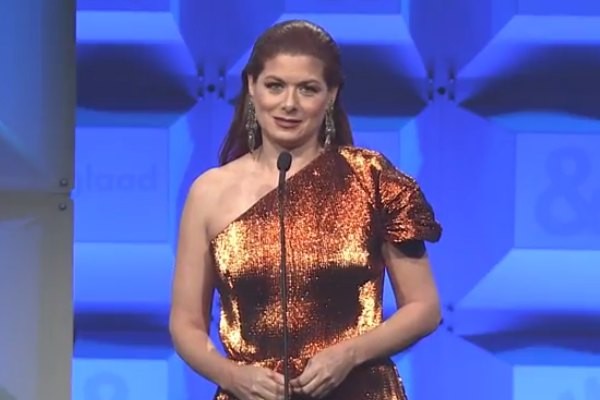 Actress Debra Messing on Saturday called on Ivanka Trump to use her influence with her father to steer him toward greater acceptance of LGBT, immigrant and women's rights.

"Right now there is a very bad and very orange man in our White House. At least a few days a month," Messing joked. "The person we shall not name came this close to signing an executive order that legally allows for discrimination against the LGBT community under the banner of 'religious freedom.'"

"There is someone I would like to make a direct appeal to this evening. It is the Secretary of State Ivanka Trump. Ivanka, girlfriend, what are you doing? Come on, it's me Deb. Let's talk for a second one Jewish mother to another."

"It's not enough to simply say that women's issues are important to you. It's time to do something. You can change the lives of millions of women and children just by telling your dad stories about real people who are suffering. Don't let him separate immigrant mothers from their American-born children. Don't let him take health care away from women who need it. Don't allow him to make trans kids like Gavin [Grimm] fight in court for their basic human dignity," she said.

Messing called on the younger Trump to stop blindly defending her father and "start defending what you say you believe in."

"Ivanka, we know you love the guy who does your hair color. It's good, by the way. So, do right by your colorist," she added to applause.

Messing in 2003 won an Emmy for playing Grace Adler on the NBC sitcom Will & Grace. The sitcom, which is returning for a new 12-episode season, was the first prime time network comedy to feature a gay lead character.